Should You Buy Your Own Cable Modem? 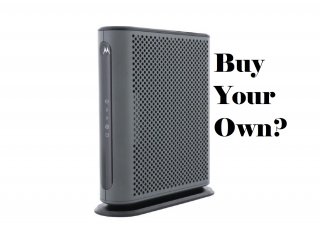 Those moving into a new home or otherwise are signing up for new Internet service are faced with a choice: Whether to rent their cable modem from their service provider or to buy one.

The modem is a separate piece of machinery from the router, although the two together form what's often called the "wireless gateway" and is offered that way.

The majority of cable and broadband customers choose to rent the equipment rather than to buy, since the providers will install that equipment themselves and most customers either don't know how to do it or don't care.

An analysis published by BroadbandNow in 2018 talked about how rental fees charged by ISPs are increasing, which makes the option of purchasing equipment more and more attractive. For instance, paying $150 for the equipment rather than renting will usually pay for itself in a year or slightly more, especially with modem rental fees from top providers now reaching as high as $15 a month.

That site listed the advantages of buying, in addition to saving money, as being able to choose their own equipment, including high-performance products that are better than what the cable companies offer. It also makes it easier to switch providers without getting all-new equipment, and avoids increases in rental prices.

The disadvantages to buying a modem include the need to install it yourself, the lack of tech support from the provider, and the possibility that the equipment will break and require an expensive replacement. Those who are planning to buy should also be sure to check with their service provider to make sure the equipment is compatible with their service.

A Nerdwallet article says that renting such equipment is preferable under a few conditions-in apartment situations with several roommates who split costs, for those whose employers pay their cable bills, and those planning to move soon.

In addition, it can be difficult for customers to rent equipment from service providers when those customers also depend on the same company for phone service.

And this PCMag article advises customers to check their cable bill to see what rental fee they're being charged--and if they cancel, to make sure the company has remembered to take it off the bill.