TCL Makes Cheap Alternatives to Samsung's QLED TVs: How Good Are They? 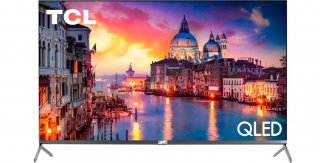 The nascent QD TV panel category has been dominated, since its inception, by Samsung's QLED TV line that first launched in 2017. While Samsung still has an overwhelming market share lead, competitors are beginning to emerge.

According to a recent report by Display Supply Chain Consultants (DSCC), the Annual Quantum Dot Display Technology and Market Outlook Report, Samsung controlled 85 percent of the worldwide market for QD panels in the first quarter, with  1.4 million unit shipments. Vizio, which makes Quantum TVs in that category, is second, followed by the banned-from-the-U.S. Huawei. Taking the fourth and fifth spots are Hisense, and TCL.

Samsung, Hisense, TCL, and a group of supply chain partners launched the QLED Alliance in 2017, at the QLED International Forum in China. According to NanoSys, which developed the technology, those companies “ committed to developing the QLED TV category and received an award for their current contributions to the QLED TV market.”

Vizio is not part of that alliance, which is why, unlike the other companies, it does not use the term "QLED" in its product names or marketing materials. Samsung came up with the term and used it first, while the Alliance allowed the other companies to it as well. Hisense, however, has not used that term and has even begun producing OLED TVs, per a recent Flat Panels HD report.

While its market share may be small, TCL’s QLED models have drawn rave reviews.

TCL began selling TVs with "quantum dots" in 2019, adding that to the things TCL's models are best known for-low prices and the Roku TV interface. Last October, CNET reviewed the 2019 TCL 6-Series and stated that "excellent image quality, an affordable price, and best-in-class Roku TV smarts propel the TCL 6-Series into the pole position of the midrange TV race."

TechRadar, meanwhile, recently named the TCL 6-Series QLED its "best TV on a budget," calling it "a beacon of hope for budget TV buyers," adding that with its Dolby Vision support and full-array panels, "few TVs have changed the home entertainment space in the same way that the TCL 6-Series has."