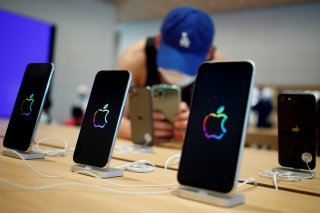 Next week is a huge one for the widespread adoption of 5G, with Apple scheduled to unveil its first-ever 5G iPhones, with the “Hi, Speed” event that’s scheduled for next Tuesday. This follows a year in which most major smartphone manufacturers have made the move to offering 5G devices, and carriers have rolled out the technology, to varying degrees.

According to new numbers released this week by Strategy Analytics, the 5G market will post major growth this year- a 1,300 percent gain, in fact, to 250 million units around the world. And that’s only with the 5G iPhones on the market for the last part of the year.

“The 5G category is the main engine of smartphone growth today and for the next decade,” Ville-Petteri Ukonaho, the associate director at Strategy Analytics, said in the release. “The 5G category is the fastest-growing part of the smartphone industry today, but there remain several challenges. Many 5G smartphone models are too expensive, most 5G carrier networks are incomplete, while multiple waves of coronavirus are causing consumer fatigue in Western markets like the US and Europe.”

The 250 million number is compared to just 18.2 million in 2019. And while Strategy Analytics did not release a forecast for beyond 2020, that number will presumably grow in future years.

Strategy Analytics added that China and the United States are the top markets for 5G, and that “Apple iPhone, Huawei, and Samsung are the top-three brands that together will capture two-thirds of all 5G smartphone sales globally this year.” This is despite Apple not releasing its phones until the fall, and Huawei being unavailable in the United States.

Another survey this week, though, shows just how much confusion there is about 5G technology.

A Global Wireless Solutions survey finds that 49 percent of iPhone users believe that they already own a 5G device, when—since the first 5G iPhone is yet to be introduced—none of them actually do.

Meanwhile, 29 percent of overall smartphone users “are unsure whether their phone is capable of accessing 5G,” while that’s even the case of nearly a quarter of those who bought their smartphones this year.

“Wireless carriers and mobile device manufacturers have made important 5G investments, but our survey demonstrates that market education is still required to help consumers better understand how 5G can impact their lives in a positive and meaningful way,”  Paul Carter, Founder and CEO at GWS, said in the release of the survey.

“But given the fact that 64% of consumers plan to buy a smartphone between now and the end of 2021, there is clearly an opportunity for 5G to drive enthusiasm for new products and services—assuming consumers better understand the benefits of the next-generation wireless technology.”