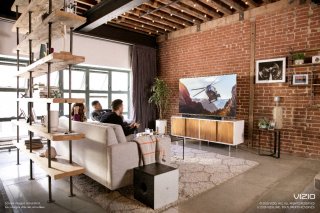 In addition to the arrival of its TV lineup, and the announcement that it will release its first OLED TVs later this year, Vizio on Tuesday announced a series of new audio products, starting with a new flagship soundbar.

That's the new Elevate Sound Bar, a 5.1.4-channel audio product equipped with both Dolby Atmos and DTS:X. The product will arrive this fall, priced at $999.99.

The soundbar sports 18 speakers across ten total channels, spread out through a 48-inch anodized aluminum body.

The Elevate Sound Bar, Vizio says, won 17 separate awards at CES and after, including the Red Dot Award. It will arrive later this year.

"At Vizio, we constantly strive to raise the bar for picture and sound quality, delivering complete entertainment as no other manufacturer can,"  Bill Baxter, Chief Technology Officer of Vizio, said as part of the announcement.

"With the debut of our first OLED television and its leading-edge picture processing, along with the first-of-its-kind Elevate Sound Bar, we are making good on that commitment to consumers. The single largest R&D effort in the company's history, the 2021 OLED TV pairs perfectly with the Elevate to create VIZIO's finest home theater experience to date."

"Consumers had one simple demand — superior sound quality — and we listened," Baxter said in the announcement. "Vizio is delivering even better audio performance this year with deep bass, serious volume levels, and clear, natural vocals. People are streaming entertainment from more sources than ever, including Vizio's award-winning SmartCast TVs; with our latest sound bars, they can rest assured that whatever they watch or listen to will sound great."