Why Comcast Suffered a Big Outage on Tuesday 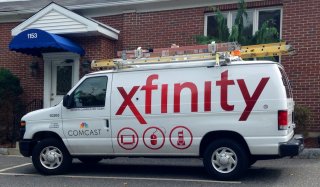 If you’re a Comcast customer and found yourself without service between Monday night and Tuesday, you’re not alone.

“Earlier, some customers experienced intermittent service disruptions as a result of a network issue. We have addressed the issue and service is now restoring for impacted customers, as we continue to investigate the root cause. We apologize to those who were affected,” the Xfinity support Twitter account said on Tuesday.

The website DownDetector, which measures outages, reported a spike in outages just after 1:00 a.m. (of over twenty thousand) and a larger spike between 8:00 and 10:00 a.m. (of over fifty thousand). An especially high amount of outages were reported in the Philadelphia area, where Comcast is located, and in the San Francisco Bay Area.

As of Tuesday afternoon, there had not yet been any confirmed reports of exactly what had caused the outage, although the Xfinity support network did call it a “network issue” in a Twitter post.

“Some customers are experiencing intermittent service interruptions as a result of a network issue. Our teams are actively working to bring impacted customers back online, as we continue to investigate. We apologize to those who have been affected,” the company said.

Service had been restored for most, but not all, customers later on Tuesday. WGN reported that a total of six states were affected. The map on DownDetector indicated that there were also outages in Chicago, St. Louis, Dallas, Atlanta, Washington, and New York.

“A WGN employee said their school district sent text messages alerting parents that a Comcast outage was impacting its phones and internet. Daycares that have Comcast, which owns Xfinity, had no way to check-in students electronically,” WGN said.

"The current issue affecting your service is resolving. Please check your service to ensure you are back up and running. If you are still having issues, please hold and we will connect you to an agent. Thank you for your patience,” Xfinity said.

NBC News did report that on Tuesday afternoon, “some customers who logged into their Xfinity accounts saw a message that ‘some customers experienced intermittent service interruptions as a result of a network issue,’ and that the issue had been addressed and service was being restored.”

In its most recent quarter, Comcast reported that it lost another 408,000 video subscribers, leaving it with 18.55 million. However, the company also gained 300,000 broadband internet subscribers while also recording $30.30 billion in revenue and $.087 per share in earnings. Both of those numbers were ahead of analyst expectations for the third quarter.

“I am pleased with our strong operating and financial results this quarter. Each of our businesses posted significant growth in Adjusted (earnings before interest, taxes, depreciation, and amortization), contributing to a double-digit increase in our Adjusted EPS,” CEO Brian Roberts said in the earnings release. “At Cable, our customer and financial metrics remained strong, highlighted by 10% growth in Adjusted EBITDA, the highest level of customer retention on record for a third quarter, and the most wireless net additions since the launch of Xfinity Mobile in 2017.”