Why Didn’t the Soviets Ever Make It to the Moon? 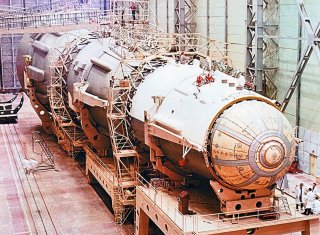 For much of the 1950s and ’60s, the Soviet Union was a feared juggernaut when it came to space exploration.

The smart money was indeed on the Soviets to put the first human on the moon, because when it came to “firsts,” the United States wasn’t even in the same ballpark. The Soviets had the first satellite, the first probe to land on the moon and the first man and woman in space.

When President John F. Kennedy, in a speech before Congress in May 1961, set out the goal for the United States to land a man on the moon before the decade was out, the Soviet Union also took this monumental challenge to heart.

In fact, the Soviet Union had already beaten the United States to the moon with its series of Luna probes. Luna 1 performed the first flyby of the moon in January 1959, and later in September, Luna 2 became the first man-made object to reach the moon when it was crash-landed on purpose near the Sea of Serenity.

In October of the same year, Luna 3 took the first photos of the dark side of the moon, and in 1966, Luna 9 became the first man-made object to accomplish a soft landing on a celestial object, returning to Earth the first close-up images of the lunar surface.

However, successfully launching a robotic probe wasn’t the same as building a rocket with enough thrust to send both humans and a 95,000-kilogram payload to the moon. This is where the troubles began for the Soviet Union.

The Soviets eventually placed their bets on the N1 rocket. At about 105 meters tall, the dimensions were similar to that of the American Saturn V, but the N1 possessed a radically different propulsion system. Instead of the five massive engines on the Saturn V, the N1 utilized 30 smaller but more efficient engines.

One major problem that arose stemmed from the complex plumbing system that made getting fuel to those 30 engines possible, so that they could fire in sync. This proved to be incredibly difficult.

On Feb 21, 1969, the first N1 test flight blasted off in Soviet Kazakhstan and crashed after 66 seconds. The second N1 launch occurred on July 3 of that same year, but that rocket fell back to its pad 9 seconds after launch, exploding with the force of a small nuclear bomb and destroying the launch facility.

Then only 17 days later, Neil Armstrong made his giant leap for mankind – and just like that, the Cold War space race to the moon was over.

Even though the Americans had won, the Soviets didn’t quit, as they test-launched the N1 twice more in November 1971 and November 1972, with both ending in failure. The scheduled fifth launch in August 1974 was scrapped, and the Soviet government decided to shut down the program.

As for the remaining N1 rockets, they were quietly dismantled, their outer shells used as humble storage sheds and hangars in an effort to hide the program’s failure from the Americans.