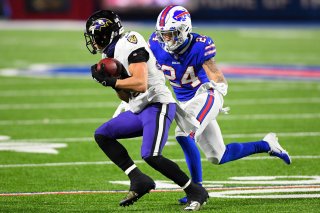 Cord-cutting trends, already on the ascendence even before the coronavirus pandemic, escalated to new heights in 2020. However, millions of people continue to subscribe to traditional pay TV.

And according to a new survey, sports are a big reason why.

Research firm Parks Associates announced this week via a public relations firm that “55% of pay-TV households in the US report availability of live sports is important in their decision to keep their pay-TV service.”

The major months for cord-cutting in the United States came in the opening months of the pandemic when all major sports were on hiatus.

“The churn rate for pay-TV services continues to trend significantly lower than the rate for OTT services,” Steve Nason, research director for Parks Associates, said in the release of the information. “This is fortunate given the lack of live sports in the early stages of the COVID-19 pandemic. Over the past year, churn rates for OTT and vMVPD services both declined as consumers turn more and more to online video sources for their entertainment.”

Most local broadcasts of professional baseball and basketball games are on regional sports networks, which are part of cable bundles. So if customers have gotten rid of pay TV and replaced it with a constellation of streaming services, they’ll miss most of their teams’ broadcasts. Even vMVPDs like YouTube TV and Hulu + Live TV, which would normally have regional sports networks available, have dropped some such channels in carriage disputes.

There are small indications that this is changing, however, NBC Universal recently announced its NBC Sports Network cable channel will be shuttered later this year, and that it will move more sports programming, especially English Premiere League soccer, to the Peacock streaming service. ViacomCBS is promoting CBS Sports access as part of its soon-to-launch Paramount+. Disney offers much, but not all, of ESPN’s sports properties for a streaming audience on ESPN+, which is bundled with Disney+ and Hulu.

What hasn’t happened yet is for regional sports networks to offer streaming versions of their product, which would include all local games. The economics of doing so have not yet been figured out, although the former Fox Sports family of networks, now owned by Sinclair and Entertainment Studios and called Bally Sports, has floated the possibility of offering such a product.