Why TVs Have Gotten Cheaper Over Time 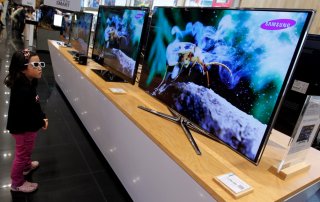 As you may have noticed, things have been getting more expensive in America this year. There’s inflation not seen since the early 1980s, with prices rising for gasoline, cars, food items, and much more. It’s even led to Social Security benefits, which are pegged to the Consumer Price Index (CPI), to get a 5.9 percent bump in early 2022.

However, there are some items that haven’t seen a price increase, and in fact, have gotten cheaper over time.

A chart has made the rounds in recent years that the American Enterprise Institute’s Mark J. Perry calls “The Chart of the Century.” The latest version of the chart, which cites the Bureau of Labor Statistics, lists a variety of “Selected US Consumer Goods and Services,” ranked by whether they’ve become “more expensive” or “more affordable.” The chart covers January 2000 to June 2021.

The ones that have gone up by the most are hospital services, college tuition and fees, college textbooks, and medical care services. Way down at the bottom, among the products that have become more affordable are TVs, followed by toys, computer software and cellphone services.

Indeed, it’s not rare for high-end TVs with huge sizes and brand-new technologies to hit the market with a price tag of thousands of dollars, before dropping into the low hundreds just a couple of years later.

“Plugged as possibly the chart of the century by economist and originator Mark Perry, it shows that prices of goods subject to foreign competition—think toys and television sets—have tumbled over the past two decades as trade barriers have come down around the world. Prices of so-called non-tradeables—hospital stays and college tuition, to name two—have surged,” Bloomberg News reported in 2018 about that year’s version of the chart.

“The other seven price series have been flat or have declined since January 2000, led by TVs (-97%), toys (-73%), computer software (-70.5%), and cell phone services (-40%). The CPI series for new cars, household furnishings (furniture, appliances, window coverings, lamps, dishes, etc.), and clothing have remained relatively flat for the last 21.5 years,” Perry said on his blog. “Because average consumer prices increased by 60% and wages by 87% since 2000, the real prices of all seven of those consumer goods and services in blue above have fallen significantly and have gotten increasingly more affordable over time.”

The chart has been questioned, however.

“I don't really like this chart bc i don't think it has quite enough nuance,” Kyla Scanlon, who writes a newsletter about the stock market, tweeted. “i think it makes a ‘point’ but its more a reactive tool versus an explanatory tool [in my opinion]”

“That’s a sobering chart,” David Lam said on Twitter. “I think if we were to overlay it with more data points, or have side by side charts showing minimum wage, avg income, homelessness, household debt, etc, itd be an eye opener.”

Back in 2019, the website the Outline looked at why TVs have gotten cheaper. It quoted a New York Times analysis from back in 2011, early in the HDTV era, which attributed that era’s drop in TV prices to “a result of a huge increase in manufacturing capacity that has led to an oversupply and continued downward pressure on prices from low-cost manufacturers and online retailers.”

“There are a few immediate causes for the continued decline of TV prices. For one thing, there are a lot more companies that can now manufacture a lot more TVs; a few of the biggest manufacturers (Vizio, TCL) only exploded in popularity in the U.S. over the past 10 to 15 years,” the Outline said. “Additionally, you don’t actually need a TV to watch TV anymore; Nielsen data pretty consistently shows that people are watching more stuff on their phones and less stuff on their actual TV sets. With less demand for actual TVs, there’s less reason for manufacturers to price them even more highly.”

That site also noted that the era of smart TVs has created a new revenue stream for manufacturers, advertising.

“The story of the cheap HD television in the last decade is, in many ways, the story of the American economy writ large. Prices may be low, but so are most people’s wages. And although customers are getting a glut of new free content from TV products, that’s because customers are now themselves the products that TCL can sell to outside marketing companies.

“The trade-offs for cheap TVs is that customers are themselves becoming the product for TV makers, which reflects the grandest Silicon Valley innovation of the last ten years: the digital ad business that catapulted Google and Facebook to their present-day stratospheric market valuations. It is, generally speaking, less labor-intensive and more exploitative of both workers and consumers. For something to be as cheap as a great TV, people have to give something up—whether they know it or not.”