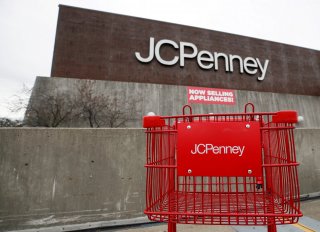 JC Penney, the venerable, more than century-old faded icon of American retail, declared bankruptcy last Friday, following years of decline. The bankruptcy was mostly attributed to years of mismanagement, as well as American shoppers' attitudes moving away from the department store model.

Now, there's a report that the world's largest e-commerce retailer is sniffing around JC Penney.

Women's Wear Daily reported early Tuesday that Amazon is in talks to buy JC Penney out of bankruptcy.

“There is an Amazon team in Plano [where J.C. Penney is headquartered] as we speak,” the report said. “There is a dialogue and I’m told it has a lot to do with Amazon eager to expand its apparel business.”

In the event of an acquisition, it's unclear what Amazon would do with JC Penney's 850 stores in the U.S. SEC filings along with the bankruptcy have indicated that the company was planning to drop its store count to just over 600.

The JC Penney story follows reports earlier this month that Amazon was considering a purchase of AMC, the international movie theater chain company.

Amazon, the rare company whose stock has surged throughout the coronavirus pandemic, is in a position to jump on undervalued assets. JC Penney's current market capitalization, per Yahoo Finance, is about $58.4 million, which would represent something resembling pocket change for Amazon, which is currently worth around $1.2 trillion. Trading of JC Penney's stock on the New York Stock Exchange was halted on Monday, following the bankruptcy filing.

When JC Penney filed for Chapter 11 bankruptcy Friday, it was with the intention of implementing a financial restructuring plan that would along them to re-emerge.

"During this process, JCPenney will continue to be one of the nation’s largest apparel and home retailers with an expansive footprint of hundreds of stores across the U.S. and Puerto Rico and a powerful eCommerce site, jcp.com," the company said.

"Until this pandemic struck, we had made significant progress rebuilding our company under our Plan for Renewal strategy – and our efforts had already begun to pay off," CEO Jill Soltau said in the company's announcement Friday. "While we had been working in parallel on options to strengthen our balance sheet and extend our financial runway, the closure of our stores due to the pandemic necessitated a more fulsome review to include the elimination of outstanding debt,”

The Milwaukee Business Journal reported last month that Amazon was looking to take over a former JC Penney warehouse in Wauwatosa, Wisc. and use it as an Amazon shipping center.