Yes, Twitter’s Stock Dropped After It Banned Trump—But It’s Far from a Catastrophe 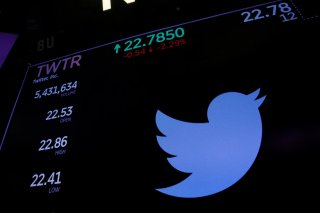 Stock drops are a frequent talking point by political commentators who don’t follow financial news regularly but feel the need to cherry-pick stock performance to score political points. A company or brand does something that's politically controversial. In the days afterword, the company’s stock drops by some amount. Therefore, this portends disaster. After all, they lost BILLIONS in value, just since yesterday!

The country saw this a couple of years ago, when Nike featured Colin Kaepernick in a commercial, and then had its stock dip for a couple of days (except that it didn’t drop all that much, and ended up rising not long after.) Now, it's happened again with Twitter, and its decision to permanently suspend Donald Trump’s account last Friday.

Following last Wednesday’s insurrection at the Capitol and a twelve-hour suspension of Trump’s account that followed, Twitter announced last Friday that it would “permanently suspend” the @realDonaldTrump account. That announcement came after the markets closed on Friday, and when they opened Monday, Twitter’s stock dropped as much as 10 percent in the early going, from its previous close of $51.48 a share to as low as $45.97.

The reaction was gleeful among some Trump supporters on Twitter, noting in the morning that Twitter, and its CEO Jack Dorsey, had “lost billions” in value in a single day.

However, to frame it that way is somewhat misleading. For one thing, Twitter’s stock recovered strongly throughout the day, reaching $49 a share by around 12:20 p.m. In the process, it made back a large chunk of what it lost in the morning.

Furthermore, if one looks at the long-term trend chart for Twitter's stock on Yahoo Finance, they’ll find that Twitter’s stock has been trending downward since late December, after hitting a yearly high of $55.87 on Dec. 14. But even with the decline on Monday morning, Twitter’s stock, at $45.97, was still higher than it was for most of 2020. The stock price didn’t even hit $40 a share for the first time in 2020 until mid-August.

And besides-nearly every company of decent size “gains” or “loses” millions, if not billions to their valuation just about every day, depending on whether their stock goes up or down, which is why that’s not an especially useful way to think about stock valuations on a day to day basis.

What effect the lack of Trump has on Twitter’s user numbers, engagement and bottom line is something that bears watching in the coming months, and will likely be addressed when Twitter announces quarterly earnings in February.

But if a story is going to be told that Twitter is financially doomed, because it’s nothing without Donald Trump—or without the numerous supporters of his who have declared their intention to leave the platform in solidarity—the stock price does not come close to bearing that out, at least not yet.