The ‘Jihadist Spring’ Is Bigger Than the Islamic State 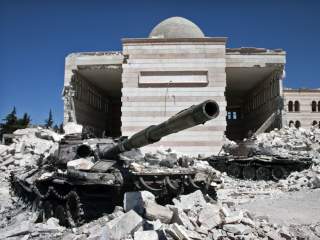 When the Arab Spring reached Syria in 2011, demonstrations in support of political freedoms, anti-corruption measures and democratic governance were met brutally by the Assad regime. Having interviewed dozens of Syrians who were part of those early protests, I was told that Islamist elements were typically met with suspicion, if not derision, by demonstrators who felt that Islamism contradicted the values and goals of “our revolution.” Fast forward to 2016 and the war for Syria is dominated by a complex and heterogeneous array of Sunni (as well as Shia) militant Islamist groups. Syria’s Arab Spring now looks more like a Jihadist Spring.

Drawing linear causal links between Syria’s failed Arab Spring and the now flourishing Jihadist Spring crudely ignores a complicated mix of closely interconnected factors. The Free Syrian Army’s inability to unite disparate rebel groups, the self-interest driven intervention of Middle Eastern states, the hesitancy of western powers to intervene, and Syria’s unique status in Islamic prophecies and long history of jihadist networks all contributed (along with many other factors) to the Levant’s current malaise. Islamic State (IS) emerged by leveraging those dynamics but they also played a fundamental role in shaping them.

Beyond the Levant, the Jihadist Spring looks like a global phenomenon and IS is a significant player in those dynamics too. As in the Levant, IS takes advantage of the perceived failings of not just weak state authorities but other Islamist groups to present themselves as the only viable source of solutions for societies in acute crisis. The practicalities of IS’s transnational expansion has seen them leverage intra-organizational fissures in established Islamist movements to attract breakaway factions (e.g. Afghan and Pakistani Taliban to Wilayat Khurasan) and co-opt established groups (e.g. Wilayat Gharb Ifriqiyyah). IS’s transnational wilayats have more than just a symbolic tie to IS run out of Raqqa—they also adopt IS’s strategic playbook. That in turn puts pressure on other Islamists to out-compete IS for popular support.

Consequently, IS is fundamentally shaping the strategic dynamics of the Jihadist Spring. IS’s campaign strategy is geared towards exacerbating its strengths and hiding its weaknesses. It appears state-like in its areas of control, more like a guerrilla force outside of those areas and a terrorist network on the peripheries of its reach. Moreover, IS engages in ‘hybrid warfare’ and even ‘hybrid governance’ where circumstances require while using propaganda as a ‘force multiplier’ for itself and a ‘force nullifier’ against opponents. It’s a politico-military campaign that inspires mimicry from friends and forces reaction from foes.

Two examples highlight the latter. According to many Syrian opposition elements I’ve interviewed, Jabhat Al-Nusrah’s rise as one of the most dominant rebel groups in Syria has been largely due to it abandoning a more gradualist governance strategy and replacing it, in response to IS’s blitz approach, with a careful but more rapidly implemented ground strategy headed by locals. Meanwhile, the Taliban’s recent resurgence in Afghanistan and the strategies it’s deployed have been driven, to varying degrees, by the ‘competition’ provided by IS’s Wilayat Khurasan.

IS’s propaganda efforts are also fuelling developments in the strategic communications campaigns of affiliates and rivals. In a recent analysis of the strategic logic of IS propaganda, the group’s counter-narrative strategy emerged as a central component of IS’s efforts to win supporters away from other Sunni groups. The resulting ‘propaganda war’ within Sunni militant Islamist circles has fuelled a race to produce messaging that innovatively weaves eye-catching imagery and powerful symbolism with rich narratives that play upon an array of rational and identity choice appeals. For instance, in response to an IS video showing the execution of its members, Jaysh Al-Islam produced a 20 minute long video which ended with the execution of captured IS fighters by men dressed in orange jumpsuits as a symbolic reversal of the IS film. Having struggled to respond to al-Qaeda and now IS’s propaganda campaigns, western governments can be sure that future threats will be even more challenging.

Despite a year of extraordinary military and financial pressures and significant territorial losses, IS remains in control of Raqqa and Mosul while foreign fighters traveling to the caliphate have reportedly doubled. Perhaps more troubling is that IS wilayats have emerged across the Middle East, Africa and Asia while IS-inspired terrorist plots in the west have security apparatuses scrambling. However, combating IS but ignoring the broader Jihadist Spring is obsessing over the battle and forgetting the war. Such is the complexity of the phenomenon we confront, damaging IS or even inflicting defeats on IS or its wilayats will merely create vacuums of meaning and control for surviving IS elements, breakaway factions or rivals to emerge and compete for influence.

Understanding the intricacies of the Jihadist Spring—both its macro-transnational and micro-societal dynamics—is merely the first step in devising counter-strategies that will have not only productive first order effects but valuable second and third order effects too. There’s a long way to go.

Haroro J. Ingram is a research fellow with the Coral Bell School of Asia Pacific Affairs, ANU. This post is based on a seminar paper presented at The Levant Crisis: Syria, Iraq and the region. This article first appeared in the Strategist.