‘Carrier-Killer’ Missiles: Will China Succeed Where the Soviet Union Failed? 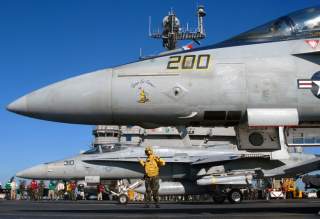 For all of the analysis (including my own) concerning the real dangers posed by ‘carrier-killer’ weapons being developed by China and now Iran, one thing remains constant: hitting a moving target in the vast expanses of the open oceans of the world is not easy.

Recently on these very digital pages I noted how the Pentagon made almost no mention of the latest anti-ship ballistic missile (ASBM) being developed by Beijing, the DF-26, in their recent annual report to Congress. While the authors of the report were sure to note the conventional, precision-strike capabilities of the weapon as well as a nuclear-tipped variant, almost nothing was mentioned of the ASBM version of the missile.

And considering the ramifications of such a weapon—a reported maximum range of 2500 miles that would greatly enhance the anti-access/area-denial capabilities (A2/AD) of the Chinese military—it makes sense for the Pentagon to comment publicly in some fashion. This all changes of course if there are doubts or if there is simply not enough information to fill out detailed analysis of the missile—no need to rile up defense experts or the informed national security public if we simply can’t make an educated determination as to the weapon’s capabilities.

Indeed, at least in some US government circles, there does seem to be some doubts when it comes to the DF-26s ASBM capabilities. The most striking was commentary in the most recent US China Economic Security Review Commission report:

“Official commentary at China’s September 2015 military parade stated that the DF-26 also has an antiship variant, indicating it has joined the DF-21D as an ASBM. If true, this variant likely would enable the PLA to target US aircraft carriers and other vessels as far as Guam (its precise range has not been confirmed). However, as stated by Andrew Erickson, associate professor at the US Naval War College, the reconnaissance strike complex that supports China’s ASBMs remains a work in progress. The PLA has not conducted a successful publicly-reported test of either missile against a moving target at sea, and the additional range of the DF-26 likely complicates the targeting challenge China already faces with the DF-21D. China’s ability to employ DF-26 ASBMs in precision strikes against US carriers near Guam will thus remain uncertain until the PLA demonstrates this capability, but the possibility that a large quantity of these missiles could be fired, and the fact that the PLA has apparently deployed them as operational weapons, indicates they could still be relevant in a conflict.”

So while the above does express some carefully worded doubts when it comes to this next-generation ASBM—the report on multiple occasions calls the ASBM “unproven”—its capabilities in the months and years to come will likely grows as Beijing perfects targeting technology, making its eventual emergence a near certainty, whether now or in the near-future.

But healthy skepticism is a good thing considering what China is trying to do—launching a missile from potentially hundreds, if not thousands of miles away, and hit a target moving at 20 knots plus that will certainly be doing all it can to avoid destruction—and that no other country has successfully deployed such a weapon.

In fact, while it is not widely known, the former Soviet Union also attempted to develop its own sea-launched ASBM in the early 1970s—and failed. As Andrew Erickson,  the first person to identify the dangers of anti-ship weapons like the DF-21D, explained in a recent article for Jane’s Navy International (sorry, this one is paywalled):

“China is not the first nation to invest in ASBM development. In the early 1970s, the Soviet Union attempted to develop the world’s first ASBM, the R-27K (SS-NX-13), to be launched from a modified Project 629 ‘Golf’-class submarine.

Despite the extensive Soviet constellation of Radar Ocean Reconnaissance Satellites (RORSATs) and Electronic intelligence Ocean Reconnaissance Satellites (EORSATs), however, this nuclear armed system suffered severe target location problems, had a 370 m circular error probability (CEP), and never became operational. In rare western coverage of the subject, the noted analyst Norman Polmar said Moscow cancelled the weapon system because of its implications for the Strategic Arms Limitation Talks (SALT), but this was likely making virtue of necessity. While this example reflects the difficulties in developing an operational ASBM, it also indicates industrial-age limitations concerning vacuum tube and early transistor technology. China has mastered ballistic missile technology and enjoys better satellite capabilities in today’s information age than the Soviet Union had then.”

Clearly China has come much further than the Soviets in developing ballistic anti-ship weapons, leveraging their massive technologically sophisticated industrial base while looking to other US weapons platforms, like the Pershing II, which utilizes a maneuverable warhead, or MaRV, to enhance its capabilities. But Beijing may have challenges the further afield as they try to lob warheads at any moving target, especially at a target that isn’t sitting still and will deploy the latest of countermeasures.

The most likely scenario is that China’s DF-21D, with a range of roughly 900 miles, and with the longest development cycle, is the most capable and accurate. The newer DF-26 will need time to develop the necessary C2 and C4ISR to hit targets at its maximum 2500 mile range. But considering how many times Beijing has surprised western security experts with its latest and greatest weapons systems—nothing is off the table, and all contingencies must be prepared for.

Harry J. Kazianis (@Grecianformula) is a Senior Fellow for Defense Policy at the Center for the National Interest and is now a Senior Editor at The National Interest. He is the author of a new monograph on Chinese military modernization: The Tao of A2/AD. The views expressed in this article are his own.