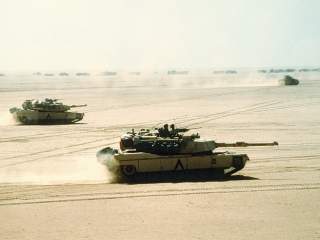 “Other battles would be more destructive than 73 Easting. Other units would fight with the same proficiency demonstrated by Holder’s dragoons. Yet in this first major engagement against the Republican Guard, the U.S. Army demonstrated in a few hours the consequences of twenty years’ toil since Vietnam. Here could be seen, with almost flawless precision, the lethality of modern American weapons; the hegemony offered by AirLand Battle doctrine, with its brutal ballet of armor, artillery, and air power; and, not least, the élan of the American soldier, who fought with a competence worthy of his forefathers on more celebrated battlefields in more celebrated wars." - Rick Atkinson, Crusade

The Battle of 73 Easting was one of many fights in Desert Storm. Each of those battles was different. Individual and unit experiences in the same battle often vary widely. The tactics that Army units use to fight future battles will vary considerably from those employed in Desert Storm. Harbingers of future armed conflict such as Russia’s invasion of Ukraine, ISIS’s establishment of a terrorist proto-state and growing transnational reach, Iran’s pursuit of long range ballistic missiles, Syria’s use of chemical weapons and barrel bombs to commit mass murder against its citizens, the Taliban’s evolving insurgency in Afghanistan and Pakistan, North Korea’s growing nuclear arsenal and that regime’s erratic behavior all indicate that Army forces must be prepared to fight and win against a wide range of enemies, in complex environments, and under a broad range of conditions. There are, however, general lessons and observations from combat experiences that apply at the tactical level across a range of enemies and battlefield conditions. The purpose of this essay is to reflect on the experience of Eagle Troop, Second Squadron, Second Armored Cavalry Regiment twenty-five years ago during Operation Desert Storm to identify enduring keys to success in battle.

On February 23, 1991, the Second Armored Cavalry Regiment moved into Iraq and initiated an offensive covering force mission forward of Lieutenant General Frederick Franks’ VII Corps. The VII Corps’ mission was to envelop and defeat the Republican Guard from the west. The Iraqi defense was mainly oriented to the south. The Republican Guard was positioned in depth to the north to preserve their freedom to maneuver. Once the Iraqis detected our effort to envelop and destroy their Army in Kuwait with the VII and XVIII Airborne Corps, elements of the Republican Guard, including the Tawakalna Division, reoriented to the west.

As an offensive covering force, the Second Armored Cavalry Regiment led the attack to ease the forward movement of the Corps, prevent its premature deployment into fighting, and defeat enemy units within its capability. Our troop, Eagle Troop of the Second Squadron, was part of that Regimental operation, an operation that ultimately located the boundary between the Republican Guard and the mechanized divisions of the Iraqi Army. Our Troop’s fight and other Regimental engagements gave the Corps commander the information he wanted before committing a “fist” of four heavy divisions that were moving behind our Regiment.

On the first day, we traveled only about twenty kilometers into Iraq and waited for the divisions to close behind us. First Lieutenant TJ Linzy’s scout platoon in Captain Tom Sprowls’s F Troop led the squadron, encountering and rapidly defeating several enemy infantry units. The emphasis was on getting to the Republican Guard and we passed prisoners on to units traveling behind us. Our Troop had our first combat action on the evening of the 24th after moving further to the north. It was dusk and an enemy position fired on us as we halted. We engaged them with direct fire from Bradleys and a tank as well as indirect fire from our mortars, killed some of them, and then many surrendered to F Troop on our right flank. As we continued the attack, leaders warned soldiers not to become complacent due to the ease of early encounter actions with the enemy; we would soon meet more capable Republican Guard units. Just before sunset during the evening of February 25, G Troop, commanded by Captain Joe Sartiano, engaged and destroyed an enemy reconnaissance unit of about twelve MTLBs—small armored personnel carriers. They were Republican Guard vehicles. G Troop took captured vehicles to the squadron command post. We examined maps and weapons. Some of the weapons were brand new. We anticipated a fight. It was clear that we had entered the Republican Guard security zone.

A VII Corps order received early the next morning, turned our Regiment and the following divisions from a northeast to an eastward axis of attack. Lieutenant General Franks told the Second Cavalry Regiment Commander, Colonel Don Holder to expect to pass the First Infantry Division (1ID) forward as early as 1800. General Franks gave 2ACR an initial limit of advance of the 60 Easting.

It rained hard during the night of the 25th, and there was heavy fog on the morning of the 26th. We could barely see two hundred meters. The fog lifted late in the morning, but was replaced by a sandstorm that also limited visibility to short distances. The Regiment’s air cavalry squadron was grounded for more than half of the day. As the weather deteriorated it became clear that 1ID would not arrive behind 2ACR until later. Lieutenant General Franks directed the Regiment to move ten more kilometers to the 70 Easting and to expect forward passage of lines with 1ID around 0200. In the afternoon of February 26, the Regiment ordered its three squadrons to continue the attack to the east to identify the defensive positions of the Republican Guard. We had a feeling that we would soon be in a fight although we did not have detailed intelligence on enemy disposition or strength.

After moving into the lead along Second Squadron’s southern boundary with Third Squadron, our Troop received orders to move out. It was 1607. Our initial limit of advance was the 67 Easting. We moved in a formation called a modified column security right. One scout platoon, Lieutenant Mike Petschek’s First Platoon, led with three scout sections of two cavalry fighting vehicles each in a “vee” formation. The other scout platoon, First Lieutenant Tim Gauthier’s Third Platoon, moved along our southern flank, with guns oriented south to cover the gap between us and Third Squadron who was moving behind us to our south. Our mortar section followed first platoon. Our tanks moved behind the mortars in a nine-tank wedge with my tank in the center. First Lieutenant Mike Hamilton’s Second Platoon was to my tank’s left in an echelon left formation and First Lieutenant Jeff Destefano’s fourth platoon was to my tank’s right in an echelon right.

Because we had no maps of the area (we used generic 1:100,000 scale maps to plot our progress in the flat, featureless desert), we were unaware that we were paralleling a road that ran west to east along our boundary with Third Squadron. The road ran through a small village and then into Kuwait. We also did not know that we were entering an old Iraqi training ground occupied by a brigade of the Tawakalna Division and elements of the 10th Armored Division who had received the mission to halt our advance into Kuwait.

The enemy commander, Major Mohammed, and his soldiers knew the ground well. The unit had used the village for billets as they conducted live fire training. Mohammed, who graduated from the Infantry Officer Advanced Course at Fort Benning, Georgia, thought it was the ideal ground from which to defend. Unaware of our brand-new global positioning system capabilities, he assumed that we would have to move along roads to avoid becoming lost in the featureless desert. He organized his defense along the road by fortifying the village with anti-aircraft guns to be used in the ground mode, machine guns, and infantry. Mohammed’s defense was fundamentally sound. He took advantage of an imperceptible rise in the terrain that ran perpendicular to the road and directly through the village to organize a reverse slope defense on the east side of that ridge. He anticipated that upon encountering his strong point at the village, we would bypass it either to the north or south. He built two engagement areas or kill sacks on the eastern side of the ridge to the north and the south of the village, emplaced minefields to disrupt forward movement, and dug in approximately forty tanks and sixteen BMPs about one thousand meters from the ridge. His plan was to engage and destroy us piecemeal as we moved over the crest. Hundreds of infantry occupied bunkers and trenches between his armored vehicles. He positioned a reserve of eighteen T-72s and his command post along another subtle ridgeline approximately three thousand meters further east. Our overall experience—long periods of movement, waiting, and preparation punctuated by short periods of furious activity—would prove consistent with unit experiences in armored combat in North Africa in World War II.

The first contact came at 1607, when Staff Sergeant John McReynolds’s Bradley drove right on top of an Iraqi bunker positioned to provide early warning to the forces in the village. Two enemy soldiers emerged and surrendered. Staff Sergeant McReynolds took them prisoner and transported them to our trains.