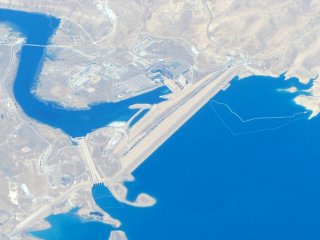 In late February the U.S. Embassy in Baghdad released a statement warning that the Mosul Dam is at a “a serious and unprecedented risk of catastrophic failure with little warning.” The Embassy confirmed that such an event would represent an unprecedented humanitarian and strategic crisis for Iraq. Speaking to the UN last week, U.S. Ambassador Samantha Power warned Member States that they should be ready to help prevent “a humanitarian catastrophe of epic proportions.”

That’s concerning for a number of reasons. The Mosul dam, classified by the U.S. Army Corps of Engineers as “the most dangerous dam in the world,” was first constructed in the 1980s and has been pumped full of thousands of tons of grout six days a week since to prevent the possibility of a breach. Over the years, there have been increasing calls for a new facility to be built amidst worrying reports concerning the dam’s viability. The dam was briefly controlled by ISIS in 2014 before being retaken by Iraqi and Western forces in August 2014. Maintenance was disrupted during the period the dam was controlled by ISIS, which reportedly continued following its recapture as many workers refused to carry out repairs and regular work. With negotiations ongoing since last year, Italian company Trevi Group have this month signed a contract with the Iraqi government to repair the dam, but a commencement date for the works is yet to be announced. The dam’s precarious situation is growing increasingly urgent as predicted floods in Iraq this month and next are expected to significantly raise water levels, rendering the structure increasingly unstable.

According to a team of researchers at the Lulea University of Technology in Sweden, and as noted by Foreign Policy a breach of the dam would lead to catastrophic consequences across many of Iraq’s urban areas:

“Within about four hours, Mosul would be facing a wave of water almost 80 feet high; flooding would cover about 28 square miles. Within 22 hours, Saddam Hussein’s hometown of Tikrit would be hit with a 50-foot wall of water. And within two days of a dam breach, Baghdad itself—400 miles downriver—would have 13 or so feet of water all over the center of the city, and flooding would cover more than 80 square miles around the capital.”

The humanitarian and civilian impact of this event would be devastating. A breach of the dam would flood areas controlled by both the Iraqi Government and ISIS. A collapse of the dam and the ensuing destruction would inhibit the ability of the Iraqi military to mount operations in the region. Civilians in areas controlled by ISIS mightn’t have sufficient freedom of movement to avoid the floods, which will leave the elderly and disabled especially vulnerable in the absence of a government-facilitated evacuation.

The expected flooding would also impact Baghdad Airport and affect the city’s six million residents for months. The U.S. Embassy, which has published a fact sheet detailing the likely impact of the dam’s collapse, stated that up to 1.47 million Iraqis could be killed along the Tigris River, while two-thirds of Iraq’s high-yielding wheat farmland in the Tigris River basin would be severely damaged.

Such concerns are exacerbated by the presence of ISIS in the surrounding areas and in Mosul. U.S. officials indicated as recently as February that it was less than likely that any successful attempt to retake Mosul would conclude in 2016, with one official positing that it wouldn’t be in the near term and “certainly not this year.” Military strategist David Kilcullen maintained a similar view here on the Strategist.

The collapse of the Mosul dam would drastically impede the ability of both the Iraqi and international forces to base in the Iraqi capital and surrounding areas, currently fortified in anticipation of any ISIS offensive. Moreover, the fallout from potentially hundreds of thousands of people displaced—in addition to the millions already affected by the fighting and instability—would stretch the humanitarian resources already in place.

More than changing the terrain and inhibiting the ability of international forces to mount operations against ISIS, the dam’s rupturing would place yet more pressure on the anti-ISIS coalition to contribute emergency aid beyond their existing humanitarian and military commitments. That’s already a highly contentious issue in many domestic contexts, including here in Australia. The collapse of the Mosul dam would significantly alter the strategic environment and might spur countries to review their roles in Iraq.

As a key source of electricity and irrigation for millions of Iraqis, the Dam has become an important symbol in the fight against ISIS. Having once captured the facility, the group could again seek to undermine repair efforts or use it to their advantage. Maintaining the operation and security of the dam at least in the short-term has become a strategic priority for Iraq and the international forces combating ISIS. Sustaining the dam’s viability is crucial, so it’s important that we secure ongoing and well-informed reports on its condition, along with updates as to the success of efforts to keep it out of ISIS’s hands.

Glen Falkenstein is a policy analyst at the Australia/Israel & Jewish Affairs Council. This article first appeared in the Strategist.