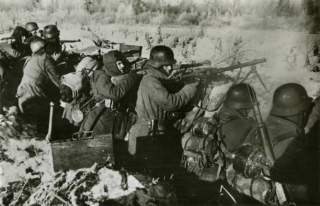 On the frigid morning of Feb. 10, 1943, the 5,900 soldiers of the 250th “Blue” Infantry Division — Spanish volunteers fighting for the Axis on the Eastern Front of World War II — were sitting in their trenches and dugouts when the high-explosive shells fired from hundreds of Soviet artillery pieces fell from the sky. For those soldiers, the world turned into fire.

Two hours later, three Soviet infantry divisions stormed into the Axis defensive positions, marking the beginning of the battle of Krasny Bor, an obscure but significant battle near Leningrad — still under siege at this point — which culminated in an Axis victory at the cost of the Blue Division, which was virtually destroyed.

Polar Star was far more ambitious, however, and Zhukov tasked three Soviet fronts with doing no less than punching through to the Baltic states in another example of Soviet “deep operations,” trapping and annihilating Germany’s Army Group North in the forests south of Leningrad. A second objective was to cut off the nearby Demyansk salient, a thumb-shaped protrusion deep inside Soviet lines.

Krasny Bor, situated 20 miles southeast of Leningrad’s city center, was a strategic point near the highway connecting besieged Leningrad to Moscow. It was here that the Blue Division sat when the artillery of Gen. Vladimir Sviridov’s 55th Army — some 38,000 soldiers combined — rained down.

Descriptions of the battle, sourced to the American historian of the Soviet military David M. Glantz, note Spanish troops — armed with rifles, machine guns and Molotov cocktails — being overrun and killed with bayonets after fighting off multiple attacks by Soviet infantry and tanks.

It is likely the Blue Division’s heaviest losses were during the opening artillery barrage. Red Army troops executed the wounded. Spanish troops on skis racing to the front line were hit by Soviet air strikes.

The first day of the battle became known as “Black Wednesday” for the Spanish. The battle was bloodier for the Soviets, who may have suffered some 20,000 casualties after penetrating five kilometers into Axis lines before the offensive stalled out. A comprehensive day-by-day summary and descriptions of the specific units involved is available at Steven’s Balagan, a website dedicated to Spanish and Portuguese military history.

The 55th Army running out of steam halted operations on this important flank of Operation Polar Star, which ground to a bloody halt in other sectors as well. However, the Soviet defeat did not discredit the strategy of deep operations as the Red Army would rely on it for its later offensives. If Krasny Bor and Polar Star were victories for the Axis, they were Pyrrhic ones.

Three quarters of the Blue Division’s troops were dead, wounded or had been taken prisoner, effectively ending the division as a fighting force, and the survivors soon retired to Spain by way of Germany. In January 1944, the Soviets fully lifted the siege of Leningrad in a massive push by more than 800,000 soldiers and more than 500 tanks.

Readers with an interest in military art may recognize that the Blue Division’s action at Krasny Bor was the subject of several noteworthy paintings. At the top of this article is one watercolor by Mario Treviño from the Spanish Army Museum in Madrid. Below is another work by Augusto Ferrer-Dalmau, a hyper-realist oil painter recognized as perhaps Spain’s best military illustrator.

The work captures the terrified desperation on the faces of the Spanish soldiers — one of whom is holding a captured Soviet PPSh-41 submachine gun.

Several factors contributed to Polar Star’s failure. One reason is that the Blue Division put up tough resistance, however, several Soviet units comprised crack troops including the 45th Rifle Division, which had previously mauled the 3rd SS Panzer Division “Totenkopf” in 1941 — even fighting its way out of an encirclement during those harrowing early months of the German invasion.

It did not help Sviridov that the Axis detected the Soviet build-up and anticipated an offensive. The Axis troops strengthened their fortifications.

Also significant was poor weather and intermittent supplies, which delayed the offensive, and allowed Axis forces enough time to pull out of the Demyansk salient. That snap decision traded territory to reinforce the main Axis defensive lines, which then provoked Zhukov to rush the operation — contributing to its “disjointed” character, according to historian Robert Forczyk’s biography of Zhukov.

Disorganization was the doom of many Soviet deep operations, based as they were on annihilating the enemy though a series of mutually-supporting or “successive” attacks, all connected to each other, and each with limited aims but directed toward a larger goal — and not a single “decisive battle.”

In many cases, confusion at the command level and shortages of supply often rested at the core of the Soviet Union’s offensive failures. When the strategy worked, it destroyed German armies. Eventually, in combination, it won the war.