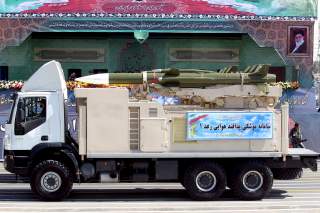 An article published by Jane’s in September 2007 would sketch out a very different explanation, which is generally accepted today with slight variations: Syrian and Iranian engineers had been loading mustard gas, a chemical weapon which causes horrifying blistering on skin contact, into a Scud-C ballistic missile when a fueling pipe burst. The resulting combustion not only produced the deadly blast, but released stocks of sarin and VX nerve agents throughout the facility, worsening the death toll.

On February 27, an article in the New York Times revealed that the United Nations had produced a two-hundred-page report detailing the transfer of components for the production of chemical weapons from North Korea to Syria. While it is uncertain whether the UN report will be released to the public, the Times details transactions after Syria supposedly destroyed its chemical-weapons facilities, including acid-resistant tiles in January 2017 (useful in chemical-weapon facilities), as well as special high-resistance valves and thermometers “known for use in chemical weapons” in August 2016.

Although these transfers do not amount to “definitive proof” because the components could theoretically have civilian applications, it is clear that Syria and North Korea resorted to extensive obfuscation through shell companies and ships registered in China or Malaysia to “circumvent sanctions.”

Of course, any lingering doubts over whether Syria was faithfully adhering to its agreement to destroy its chemical-weapons stocks were surely dispelled after Syrian warplanes dropped munitions loaded with sarin gas on the village of Khan Sheikhoun on April 4, 2017. Furthermore, 2018’s intensification of chlorine gas-attacks shows that the Syrian government continues to practice chemical warfare against its civilians in rebel-held areas. However, chlorine gas has attracted relatively little attention; it cannot be regulated because it is produced with common industrial chemicals, and though attacks typically harm dozens of people at a time, the number of deaths is typically “only” in the single digits.

Nonetheless, the Times article highlighted the key role North Korea has played in transferring chemical and other weapons to Syria, in exchange for badly needed cash or barter payments, a role dating back to the 1980s and ’90s. However, this mutually beneficial relationship between pariah states has occasioned a curious number of hair-raising accidents—which may not in fact be accidental.

Blowing the Doors Off the Syrian Chemical-Warfare Program

At 4:30 in the morning on July 25, 2007, a fiery explosion tore through a heavily guarded building a dozen miles southeast of Aleppo, Syria. The building was part of a complex known as al-Safir, one of five constructed by the Syrian government to produce and store chemical weapons. Al-Safir particular specialized in Sarin and VX, extremely lethal nerve agents that among other terrible effects disrupt the muscle responses necessary for breathing.

The shock of the blast was so great it blew off the facility’s heavy metal doors. Choking clouds of gas flooded through the surrounding complex, which measured five miles by two miles.

Some accounts claim that as many as two hundred were wounded or killed in the accident. Local medical staff could not cope with the disaster and it became necessary to summon outside help to the classified facility.

Publicly, the Syrian government claimed that the facility had been a conventional arms depot, and that temperatures exceeding fifty degrees Celsius had caused munitions to cook off in a chain reaction. But that didn’t square with the timing of the explosion during a cool desert night.

An article published by Jane’s in September 2007 would sketch out a very different explanation, which is generally accepted today with slight variations: Syrian and Iranian engineers had been loading mustard gas, a chemical weapon which causes horrifying blistering on skin contact, into a Scud-C ballistic missile when a fueling pipe burst. The resulting combustion not only produced the deadly blast, but released stocks of sarin and VX nerve agents throughout the facility, worsening the death toll.

In some later variations on this story, the gas being loaded was also a nerve agent, and the missile was a longer-range Scud-D.

The report listed fifteen Syrian engineers among the dead, “dozens” of Iranians and three North Korean technicians. Indeed, North Korea had played a key role in supplying both Syria and Iran with chemical weapons and ballistic-missile technology with which to launch them at distant targets. The al-Safir facility had been constructed two years earlier with North Korean assistance.

North Korea produced its first ballistic missiles by reverse-engineering Scud missiles acquired from Egypt. It promptly developed an improved longer-range missile called the Hwasong-6, or Scud-C. According to defense analyst Bruce Bechtol in his book Defiant Failed State, in the early 1990s Damascus used money received from Saudi Arabia for its participation in the Gulf War to pay Pyongyang $500 million to purchase 150 Hwasong-6s.

North Korea later developed an improved variant with a range of around five hundred miles, designated the Scud-D, and delivered some to Syria 2000. One of these Scud-Ds crashed on Turkish soil during a test in 2005; upon analysis, it was discovered these were being modified for even greater range and accuracy. Much of the exchange in technical expertise was facilitated by personnel from the Syrian Scientific Studies and Research Center.

Ballistic missiles and chemical weapons are intrinsically dangerous technologies, and it’s entirely possible the disaster at al-Safir was simply an accident. The Assad government nonetheless investigated, and they reportedly concluded in private that sabotage had occurred. But by whom?

Bechtol and other commenters on the al-Safir accident typically make a connection to several other incidents that hint at ongoing efforts by Israel to sabotage Syrian and Iranian efforts to develop weapons of mass destruction.

For example, prominent Israeli journalist Ronen Bergman later wrote in his book The Secret War with Iran that a senior Israeli minister had suggestively described the al-Safir explosion as a “wonderful accident.”

On September 6, 2007, less than two months after the explosion at al-Safir, ten Israeli F-15 jets fighters penetrated deep into Syrian airspace, escorted by F-16s and protected by a blanket of jamming and deceptive electronic-warfare countermeasures that disabled Syrian air defenses. As they approached a facility in the eastern province of Deir al-Zour, commandos waiting on the ground highlighted targets with laser designators. The warplanes released more than thirty thousand pounds of bombs, destroying a Syrian nuclear reactor under construction there with North Korean assistance, bought at a price estimated to be equivalent to $1–2 billion. Ten North Korean engineers were among the dead.

Other accidents and unlikely deaths had befall others associated with the transfer of military technology between Korea and Syria. Notably, on April 22, 2004, a titanic explosion registering as a 3.2 on the Richter scale ripped apart a train in Ryongchon, North Korea, devastating the town. Officially the blast was triggered by electrical wires interacting with a cargo of ammonium nitrate, a substance used as a fertilizer in rockets and explosives, though curiously North Korean leader Kim Jong-il had passed through the station only a few hours earlier. Among the 161 dead were ten Syrian SSRC engineers.

Later in 2009, Syria would test launch another Scud D missile under the supervision of North Korean and Iranian Revolutionary Guard Corps technicians. However, the missile flew off course and killed twenty civilians; it is unclear if it was equipped with a conventional or chemical warhead.

Nonetheless, when these past incidents are considered alongside the recent UN reports, it becomes clear that the relationship between Pyongyang and Damascus is deeply rooted, and that the former will likely continue to transfer the means to produce deadly weapons to the latter in defiance of international sanctions and agreements.