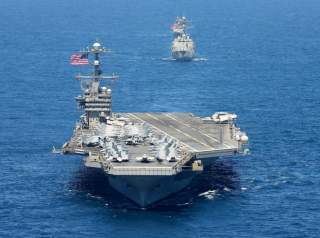 As the United States continues to reassert its right to freely navigate the seas in the Western Pacific, the specter of a potential confrontation with China looms in the background.

While the guided missile destroyer USS Lassen passed within twelve nautical miles of a Chinese man-made island in the South China Sea without incident, in the future there is always a possibility that such a passage might not end quite so peacefully. The Chinese strongly protested Lassen’s passage, even though artificial islands are not granted territorial status under the United Nations Convention on the Law of the Sea (UNCLOS). Moreover, Beijing has said it will take "all necessary" measures to prevent similar future U.S. Navy operations.

But what could China do? If there is a confrontation—these are three Chinese weapons that could play a role.

If the People’s Republic of China is willing to seriously up the ante—to the point where it is willing to risk a war—it might seek to lay mines within the twelve-mile zone around these artificial islands.

While sea mines are often an afterthought for many naval strategists, such weapons have damaged more U.S. Navy ships since the Second World War than every other type of weapon combined. Indeed, fifteen warships have been crippled or destroyed by sea mines. The most famous of these was the multi-billion dollar Aegis cruiser USS Princeton, which was severely damaged by a mine that cost only thousands during the first Gulf War.

China has learned the lessons of history well while the U.S. Navy has only recently reinvigorated its mine warfare efforts. Indeed, the Chinese fleet has at least forty mine warfare ships and it is continually improving its capabilities. It’s also investing in ever-more advanced sea mines while the U.S. Navy continues to dither on the Remote Minehunting System.

If there were some kind of confrontation in the South China Sea, Chinese diesel-electric submarines (SSK) could be a very dangerous threat. While SSKs don’t have nearly the speed, endurance or overall capabilities of a nuclear-powered attack submarine, they are incredibly quiet. In tight littoral waters, these conventional submarines are extraordinarily difficult to detect—some have compared them to “a hole in the water.” As such, they are extraordinarily dangerous.

China has a formidable SSK force that includes extremely capable Soviet-designed Kilo-class boats. It also has its own indigenous Type 039 Yuan-class SSKs, which are dangerous threats in their own right—especially as they incorporate an air-independent propulsion systems that enable them to stay submerged for extended periods.

Armed with an array of cruise missiles and torpedoes, these SSKs are a deadly threat—especially since surface ships are very vulnerable to undersea attacks.

While neither Chinese ship was a technological match to Lassen, the American vessel has almost no anti-ship capability except for its five inch gun and the anti-ship mode of its Standard anti-aircraft missiles. Those wouldn’t do much damage to a major Chinese surface combatant.

The U.S. Navy—after the Soviet collapse—essentially decided that the sea was its playground and focused almost solely on land-attack missions. Sea control was taken for granted, and as such anti-ship and anti-submarine warfare were neglected. The chickens have come home to roost as the Chinese ships massively out-stick Lassen with their array of long-range anti-ship missiles. Had the Chinese chosen to sink Lassen, it would have been sitting at the bottom of the South China Sea right now.

The U.S. Navy needs to urgently get its warships armed with proper anti-ship weapons and focus much more attention of anti-submarine and mine warfare.