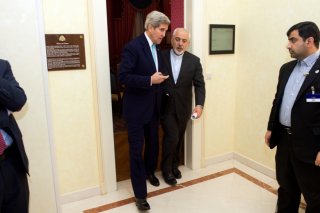 Last week's announcement that the P5+1 and Iran had reached agreement on the parameters for a comprehensive nuclear deal has, unsurprisingly, provoked heated debate. This is despite the fact that there is still no deal yet.

Although the Parameters for a Joint Comprehensive Plan of Action say a lot – perhaps more than we were expecting – about what a deal would look like, the detail still needs to be negotiated (by the end of June). This has not stopped people rushing to judge the parameters. It helps, of course, if you have already made up your mind about whether negotiating with Iran over its nuclear program is a bad thing or a good thing.

I would argue that there three ways to judge the Parameters: on its own merits; in comparison to alternatives; and in the context of future US policy in the Middle East.

Before examining each of these I want to be clear about my assumptions. First, whatever justification Iran has provided for its nuclear program (everything from energy production to national technical achievement, any of which may be true to some degree), a key purpose of Iran's nuclear program is to furnish Tehran with the technical means to produce a nuclear weapon.

My second assumption is that, because Iran has a track record of deceptive conduct with respect to its nuclear program and has been caught out a number of times, there is little ground for trusting Iran and good reason to assume it will cheat.

My final assumption is that Iran's nuclear program is just one part of the threat the Iranian regime poses to Middle East security and stability. Its support for terrorism, its denial of Israel's right to exist, its threats to the internal stability of many of its Arab Gulf neighbors, and its hegemonic ambitions in the Middle East are other key elements.

Of course, one can dispute these and even point to examples of other states in the Middle East posing similar threats (some of them are Western allies). Nevertheless, because Iran is seen as a threat in these and other respects by many of its neighbors, these are fears that must be dealt with in any effort to build a more stable order in the region.

Judged solely on its merits, the deal places significant obstacles in the path of any Iranian effort to build a nuclear weapon, but leaves much of Iran's nuclear infrastructure in place. In doing so it places an substantial burden on whatever mechanisms are put in place to both ensure that Iran does not cheat and to ensure it is punished if it does cheat.

Iran will have fewer (and older) centrifuges with which to enrich uranium, and will not be able to produce weapons-grade plutonium at its Arak reactor, which will be re-built. But these concessions are balanced by the fact that Iran will keep most of its nuclear infrastructure in place, including the underground facility in Fordow that it built in secret. Most of the measures are also time limited, so that after 15 years the restriction on enrichment levels and stockpiling of enriched uranium will end.

What the parameters are least clear on is what would happen if Iran cheated. President Obama has promised a snap-back of sanctions. In theory, military action remains on the table. But unless any cheating is really egregious it will be hard to get international consensus on what to do about it, particularly since, once sanctions are lifted, commercial and other national imperatives will come into play.

The Parameters also say nothing about other negative aspects of Iranian behavior, from its support for terrorism to its threats against Israel and its Arab neighbors. Supporters of the agreement are right to say that dealing with these issues would make any deal impossibly complex to negotiate. But it is also true that any nuclear agreement will end Iran's political and economic isolation. Even if it limits Iran's nuclear ambitions (at least for a while), any agreement would leave Iran stronger at a time when its reach and influence in Lebanon, Syria, Iraq and Yemen is already leaving its neighbors feeling deeply threatened.

So, judged by its merits alone, the Parameters do not appear to block every possible pathway to an Iranian nuclear weapon, as President Obama has suggested. Nor is it likely to make Iran's neighbors feel much safer, which is critical to ensuring that any deal does not result in others in the region building their own nuclear weapon.

The agreement does, however, get higher marks when compared to the alternatives. There are two of these: bomb Iran's nuclear facilities and/or continue sanctioning Iran until Tehran offers deeper concessions.

It is possible to bomb Iran's nuclear infrastructure, although it would take the US, rather than Israel, to do it real damage. Estimates as to how much this would delay any Iranian effort to produce a nuclear weapon vary. Some say 2-3 years, some much longer. But it is unlikely to be any longer than the 10-15 years that the Parameters provide for.

More importantly, without having at least attempted an agreement in good faith, it will be difficult for the US to gain support for military action. This matters for a whole lot of practical reasons, from the basing and overflight rights necessary to carry out an attack, to the support needed for sanctions to ensure that Iran did not rebuild its nuclear program quickly after a military strike.

And this is to say nothing of the consequences of a military confrontation in the Middle East involving the US at a time when the region is already in flames.

Others have argued that the international community should stick with sanctions and extract a better deal. The problem is, we have been down this path before. In the early to mid 2000s the Bush Administration insisted Iran would have to give up its right to enrichment as a precondition for negotiations. That principled insistence, backed by a growing regime of sanctions, had only one unfortunate result. In the early 2000s the two sides were negotiating over a few hundred Iranian centrifuges; today Iran has 19,000.

Sanctions have done nothing to slow down Iran's nuclear program. It is true that financial and oil sanctions of recent years have had a deep impact on the regime and the country. This has been supported by an unprecedented international consensus. But using sanctions to get the Iranian regime to the negotiating table is one thing; using sanctions to get the regime to capitulate is another altogether. The Iranian regime is perfectly willing for its people to suffer even deeper economic distress to protect its core interests. And sustaining really tough international sanctions over a prolonged period is difficult, as the gradual erosion of the sanctions regime on Iraq showed.

Moreover, all the things that critics of the current parameters point to — from the possibility of Iran cheating, to the difficulty of proving and sanctioning cheating when it does occur — are possible and in fact more likely under a continued sanctions regime.

So the Parameters raise questions when judged by their own merits, but look better when compared to the alternatives. How do they fare when examined in the context of future US policy in the Middle East?

Many of America's Middle Eastern allies fear that a nuclear deal with Iran is either a prelude to greater strategic cooperation between the US and Iran or a pretext for an American withdrawal from the region.

Concern about the latter, caused by Obama's efforts to extricate the US from Middle Eastern conflicts, has already driven competition between Sunni Arab states and Iran in the region, from Syria to Yemen. And in the deeply conspiratorial mindset of the Middle East, there remains a real fear that America would love to return to the days of the Shah when Iran was a pillar of US policy in the Middle East.

Indeed, more than anything, this agreement will need to be judged not by what is in it, but by what the US does around it. Washington will need to promise its allies that it is not going to strike regional strategic deals with Iran that cut across their interests. It will need to help allies defend themselves against Iran's conventional and covert threats to their security, and not just the nuclear threat. And most of all, the Obama Administration and its successors will need to reassure America's allies in the Middle East that it will not leave them to face Iran alone.

Anthony Bubalo is the Research Director at the Lowy Institute for International Policy. He is also the Director of the West Asia Program covering the Middle East, Central and Southwest Asia. His research focuses on Australian policy towards West Asia and the linkages between West Asia and East Asia. He has produced research on Islamism, democratisation and energy security, with a particular focus on Egypt, Israel and the countries of the Gulf. He comments regularly on Middle Eastern politics for the Australian and international media outlets.