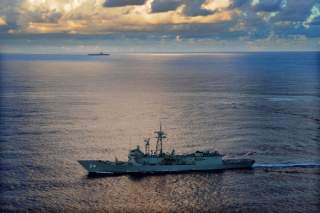 In light of the new surface warship construction program announced by Prime Minister Abbott in Adelaide last week, some misconceptions need to be dispelled.

First is the idea that, under the Government's new plans, the ANZAC class frigates will be replaced well before their due date. The first ANZAC commissioned in 1996. It will be 24 years old when production of the new ships starts. The delivery date of the first of the Future Frigates has not been specified in the Government's announcements, but, at best, will be during or after 2024. Given a 12-month 'drumbeat', this implies one-for-one replacement by 2032, when the newest ANZAC (HMAS Perth) will itself be 26 years old.

An 18-month cycle (which is more likely) would see the relief of the eight ANZAC frigates completed in 2036, by which time even the newest ANZAC will have been in service for 30 years. If New Zealand is to be brought into the program, as it was for the ANZAC class, then it will take spots in the production line—and probably early ones at that, given that HMNZS Te Kaha and Te Mana were the second and fourth ships in the original ANZAC program. This could delay completion of the changeover for the RAN until 2039.

The same logic holds for the Armidale class, which were designed for a 15-year service life. Even without the concerns that have arisen over their structural strength, the Government's plan to start production of the replacement class in 2018 will result in the first Armidale going out of service around 2020, which is 15 years after commissioning. Given that the larger new Offshore Patrol Vessels will have a slower production rate than the Armidales (which were completed within a three-year period), it is likely that the last of those patrol boats will be at least 20 years old by the time they go.

Arguably then, in the case of both classes, the Government is acting just in time to prevent a capability gap that often accompanies the transition from an aging, increasingly unreliable platform to a new, unproven successor.

Another misconception relates to service lives and refits. The truth is that 30+ year service lives are generally only achieved with the benefit of half-life modernizations, and the Australian experience of these activities has been mixed.

They can be extremely expensive, carry their own risks (integrating new systems into an old platform is always a challenge) and may result in ships being out of service for extended periods. A 30+ year 'life' thus does not necessarily equate to 30+ years of availability. Carefully planned, it is true that significant updates can be effective, as appears to be the case with the current work on the Australian ANZAC class. However, this program is very much focused on the air defense capabilities of the eight units. That other work may be needed on the ANZACs in the future is suggested by the fact that the New Zealand Navy is replacing the diesel generators and doing other systems renewal on its pair.

Another misconception is the desirability of a 'proven' design. This is undeniable in theory, but the truth is that warship designs evolve constantly and the time taken to put one into service and 'prove' it is such that there is a real risk of being left well behind in starting a new program with such a ship – the early obsolescence of internal systems and equipment being just one such risk.

The key requirement is for the detailed design work to have been completed and checked before metal is cut. This is the critical and often misunderstood element of shipbuilding. It relates not just to the platform as a whole but to every element inside it and is generally the key 'critical path' activity. The fact is that a lack of expert naval architects and draughtsman has been the single greatest impediment to naval construction programs over the last century, even more so than the availability of finance. It has both prevented the introduction of new ships and delayed the completion of approved projects in many major navies, not just the RAN.

It is also practically impossible to accept another nation's design without some modifications. Apart from domestic workplace health and safety requirements, even in an era of globalization, international standardization is not as general as is sometimes believed. An apparently small matter such as differences in the national size of cargo pallets can cause significant difficulties in storerooms and refrigeration spaces.

Finally, the suggestion that Australia cannot build sophisticated ships is simply not true. Apart from the success of the ANZAC class and the great majority of the national effort with the Collins class submarines, the quality of Australian naval construction has generally been very high. The two Australian-built FFGs, Melbourne and Newcastle, were notable for the higher quality of their finish than their American-built equivalents. Our difficulties in the past have almost always been the result of leaving design work too late, of having too-short production runs, of failing to manage the workforce, and sometimes of trying to save money in a particular budget year by slowing the build.

The challenge is for government, Defense and industry to work together to ensure that the new programs keep to schedule and achieve value for money in every sense.