4 Things You Didn’t Know About the U.S. Air Force’s Role in Fighting Ebola 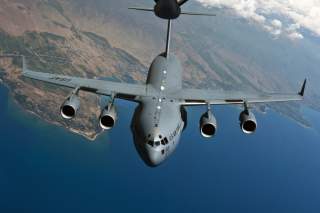 With so much misinformation circulating about the scale and domestic danger of the Ebola threat, less attention has been paid to the U.S. military’s effort to stem the disease’s spread in Africa. Operation United Assistance is now well underway, drawing the joint armed services together with a wide range of interagency and multinational partners. While the headquarters of the U.S. Army’s 101st Airborne Division have been the most visible element of this operation, much of the behind-the-scenes work has been conducted by the U.S. Air Force. I spoke with Air Force participants to get a sense of this contribution:

1. The U.S. Air Force is the backbone of the anti-Ebola effort. From the outset of Operation United Assistance on September 17 to October 21, Air Mobility Command (the U.S. military’s worldwide airlift system, commanded by General Darren McDew) flew 208 sorties in support of operations, transporting 1,989 short tons of cargo and 595 passengers. This provided the logistical foundation for the entire mission.

2. Airmen are building bases and getting their hands dirty right alongside the Army. There are over 200 Airmen on the ground—roughly one quarter of the United States’ total 880 troops currently deployed to West Africa.  These Airmen are civil engineers, logisticians, and operational coordinators, engaging in a wide range of tasks. They are assessing sites for temporary air bases and pitching in with the building.

3. Airmen are providing medical support, too. The Air Force’s Expeditionary Medical Support System (EMEDS) are devoting critical in-house talent to Operation United Assistance’s medical mission set. The Air Force’s 633rd Medical Group completed deployment of a modular hospital in Liberia on October 20—the first deployment of a facility of its kind. This hospital will be used to train crucial emergency care responders.

4. Volunteer Air Force Reservists and the Air Guard provide significant capability. The Air Force relies heavily on volunteers in its Reserve Component (which includes the Air Guard and the Reserves) for all of its day to day and surge operations.  Accordingly, many of the C-17 sorties are being flown by Air Force Reservists, who have volunteered to take time off of their civilian jobs to support the anti-Ebola mission. Likewise, 70 Airmen from the Kentucky Air Guard 123rd Contingency Response Group have deployed to Senegal with active duty airmen from California and New Jersey to support the Joint Task Force—Port Opening (JTF-PO) operation, where their mission is to move the supplies and support through to the main effort.

Although the Air Force supplies only a quarter of the most visible “boots on the ground” for this mission, without the other dozens of less visible “boots in the air,” there would be no military mission at all.

The above first appeared in CFR’s blog Defense in Depth here.