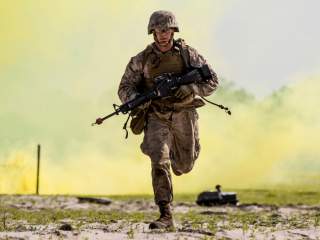 In October 1957, Commandant of the Marine Corps General Randolph Pate sent Lieutenant General Victor Krulak a brief memo with a simple question: “Why does the U.S. need a Marine Corps?” Recalling his work on a study in 1946, to save the Corps from “summary destruction” by Marine-hating President Harry Truman, Krulak responded simply that the U.S. did not need a Marine Corps. As he later wrote in his book First to Fight, the United States didn’t need a lot of things, but the United States wanted a Marine Corps. At a recent meeting at the Brookings Institution, I had the opportunity to take in ideas from almost a platoon of senior officers of the USMC, and many less martial-looking think-tankers from around Washington. These prompted me to devise four incendiary questions about the best future for the service.

As Krulak admitted in considering that weighty question, the U.S. Air Force flies pretty well, and the Army has shown at Normandy and elsewhere that it once could take beaches. In theory, any army or navy can train and equip landing troops without constituting a separate service. The Royal Australian Navy's helicopter carriers Canberra and Adelaide will soon carry troops of 2nd Battalion, Royal Australian Regiment, and helicopters of both Army Aviation and the Fleet Air Arm. The French Armée and Marine Nationale have a similar arrangement. But a look at comparative military organization worldwide suggests other models too. Today’s Swedish Amphibious Corps was once part of the Coastal Artillery, which was once part of the Army, before being amalgamated with the marine regiments and mine units, and reassigned to the Navy in 1901. Like the Royal Marines, they operate their own landing craft; U.S. Marines rely on the U.S. Navy for anything larger than a rubber boat.

American marines know that any of these models can work, so the service maintains a healthy paranoia about how to best serve national strategy—if only, as Aaron O’Connell notes, to best serve the Marines’ Few Good Men fanaticism for being Marines. They grouse incessantly about the Navy’s failure to budget for enough assault ships, knowing that marines without ships are like paratroopers without planes. Indeed, I heard one marine officer assert that demand from the regional commanders for conventional forces can justify a fleet of 50 assault ships. That’s easy when the four-stars have wars for which to prepare, but no budget battles to fight. To start the exercise, though, what’s not in that demand? To what specifically should the Marines be comparing their own utility, with an eye towards grabbing their share a flatlining military budget? And of what should they be offering to build more?

Whether characterizing themselves as amphibious or expeditionary, as America’s 911 or crisis-response force, Marines emphasize that they’re a bit more ready most days than the National Guard. As such, the Guard is not the organizational rival. Plenty of Marines might be quite happy if the Regular Army and Air Force would focus on preparing for the Big War, so that Marines can claim authority over the small ones. Their post-Benghazi establishment of the special tiltrotors-and-infantry air-ground task forces was brilliant. Everyone seems to want them. The Army and the Air Force could have accomplished the same, but didn’t, if only because they still don’t play together quickly and seamlessly. All Marines do, and this can recommend future strategies.

On What Kind of Ships?

Second, if the Marines could budget for the ships they ride, how would the design of the individual ships differ from the pattern today, and how would it differ the overall composition of the fleet? Over time, I have garnered a few opinions from Marine officers, and most loudly about boats. The helicopter carriers America (LHA-6) and Tripoli (LHA-7), plenty insist, should have been designed with well decks. Sometimes I wonder if the Corps doth protest too much. While future Americas will be their own subclass with well decks, I am still trying to understand how this dispute arose, for the whole point was to increase hangar bay and fuel capacity for the Marines’ own rotorcraft and jump-jets. It’s a unique organization strength—getting away with complaining about getting what you want.

Even so, this is a conventional question, around since the development of the helicopter carrier in the 1950s. In contrast, in the November 2014 issue of Naval Institute Proceedings, retired USMC officer J. Noel Williams recommended something very different. In “A Fleet for the Unmanned Era,” he proposed the “frigate helicopter dock”—a ship very similar to, just larger than, the Royal Danish Navy’s innovative Absalon-class support ships. Each of the 6,000-ton Danish ships carries its own medium-range missiles and five-inch cannon, but has room for a few helicopters and landing boats, as well as 200 troops. At a proposed 10,000 tons, Williams’s concept might be properly a “cruiser helicopter dock,” though as Defense News editorialized, nothing says flexible like frigate. The added tonnage is not merely because Americans like to supersize all things, but so that the ships could carry Osprey tiltrotors and larger landing craft. As an added benefit, the well deck could handle all sorts of boats, manned and otherwise, for littoral operations. As the Navy works to distribute its lethality, the Marines would distribute their presence, and flourish not by having more amphibs, but by making every ship an amphib. Moreover, as Williams stressed, the huge investment in American lives represented by a Marine unit afloat merits protection that today’s otherwise benign assault shipping does not afford.

So, how to pay for this construction plan? If the Marines—or the Navy for that matter—controlled the budget for the troops and ships, might they trade off the former for the latter? The Navy is ruining the material condition of its ships by endlessly responding to Washington’s demands for Cold War forward presence on half a Cold War fleet. Marine ground and air units, however, are not as overcommitted. When the Corps insists that national war plans require enough shipping to move simultaneously two brigades—effectively two (ground) regimental combat teams, two composite air groups, and two logistics regiments—it’s natural to ask why the Corps maintains enough force structure for seven or eight of those.

There are some easy answers to that last question. In the Second World War, after their Marines were busy fighting ashore, the Navy would want its transports to regroup, refit and find other Marines to assault another island. A plausible scenario like that is hard to imagine today, but Marines not on ships are still available to fight as infantry formations, supporting those war plans elsewhere in the world. That the force structure is not in the Army is partly because the USMC is institutionally valuable on its own, and partly because, as General Krulak observed, Americans seem to want it that way. But that doesn’t mean that Americans want or can even best use their Marine Corps exactly as it is.

For a fourth question, consider what the Marines so proudly do year-in and year-out. As another Marine officer noted, crisis response has meant non-combat operations nine times in ten, and frequently humanitarian relief. Marine Expeditionary Units are comprised of (infantry) battalion landing teams, composite air squadrons, and logistics battalions, but they almost never fight together as such. In light of the preceding three questions, how might the Corps reorganize for the raiding and rescues it most often undertakes?

This could mean, as Scott Kinner recommended in that same issue of Proceedings, a “custom-built Corps,” even more matrixed than today. Alternatively, it could mean a Marine Corps organized permanently around its MEUs, and more focused on distributed operations. Or, for those less combative missions, perhaps each Marine division should have an engineer regiment, rather than just a battalion, so that MEUs could travel with more engineers, and perhaps even Seabees, traded for less infantry. To cover the globe, the Corps might want more, smaller MEUs, even before they’re cruising about on Williams’ frigates. Few in the United States seem enthused about committing divisions of troops to the Middle East, and a small-war approach might actually be, as Robert Newson of the Council on Foreign Relations advises, more cost effective. Such a reorganization could be more not just strategically effectively, but organizationally competitive, in sharpening the Marines’ proposition within the useful aspects of inter-service rivalry.

James Hasik is a senior fellow at the Brent Scowcroft Center on International Security. He thanks the Brookings Institution for the invitation. This article first appeared in the Defense Industrialist.