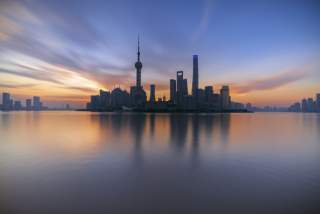 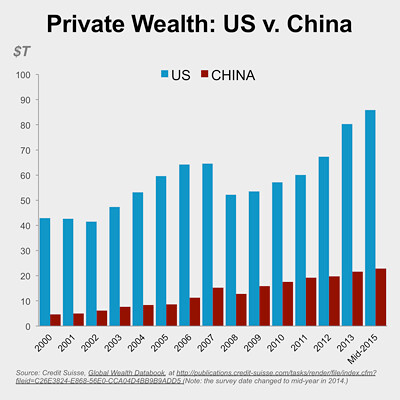 There’s been tremendous amounts of discussion recently concerning the “Thucydides trap.” The trap occurs when the leading power becomes frightened of a rising power and war ultimately results. The candidates today who could spring such a trap are the United States and the People’s Republic of China, where Beijing is said to be rising and capable of threatening Washington’s global position.

Thankfully, there is an important weakness in this argument: China is not capable economically of threatening the U.S. It’s too early to be sure but Beijing may no longer even be catching up economically to Washington.

For the last 15 years, Credit Suisse has been compiling data on where global private wealth is located. The data do not perfectly capture a U.S.-China economic comparison but they do not need to, they just need to be just somewhere in the ballpark. The reason some imprecision is acceptable is the stunning size of the gap they show between the U.S. and China. As of the middle of 2015, Credit Suisse puts the stock of American private wealth as $85.9 trillion and Chinese private wealth at $22.8 trillion.

There are many things to be said about this but they all pale before the number itself. What notion of China as peer or genuine challenger stands up to a $63 trillion private wealth gap? What information can compensate for $63 trillion?

An obvious possibility is that Credit Suisse is just wrong. Compiling global wealth numbers is a considerable task. However, the series for wealth for both countries (and others) is both consistent and sensible over time. In addition, the Credit Suisse numbers for the U.S. are close to the Federal Reserve’s series on household net worth.

Calculating net private wealth for China is more difficult but Credit Suisse at least has the distinction of not being a tool of the Communist Party. Even if Chinese private wealth is underestimated by $10 trillion, it does not matter too much. China is still not in the same league as the U.S.

Chinese state-owned enterprises have very hefty assets. However, China’s debt is very high, has been rising rapidly, and is largely attributable to the public sector. Unlike the U.S., China’s net public sector position is positive but it is also deteriorating. Mid-2015 net national wealth for China is near $28 trillion. The more comprehensive, national wealth gap between the U.S. and China is $45-46 trillion, still a staggering amount.

Much of the talk about a Thucydides trap is driven by the idea that China, while much poorer on a per-person basis and not as advanced technologically, has in fact caught up economically. This somewhat odd claim is based heavily on the notion of gross domestic product (GDP) adjusted by purchasing power parity, as popularized by the International Monetary Fund (IMF).

To be blunt, the comparison of the U.S. and China on the basis of GDP adjusted by purchasing power is fraudulent. The idea behind purchasing power parity is that the same good or service should have the same price in different markets, if the markets are open to competition. To apply this to the whole of China’s GDP requires that the vast bulk of transactions – not just consumption but also investment and government acquisitions – are conducted in open markets.

But the IMF itself does not believe this, correctly advising China for years to pursue pro-market reform. It is simply wrong to apply a purchasing power correction based on competitive markets to the whole of or even most of Chinese GDP. (This fundamental problem relegates to a secondary matter the very difficult task of calculating price levels for the U.S. and China in order to compare them.)

Since some transactions included in China’s GDP are conducted in competitive markets, it is reasonable to argue that a better measure of the annual GDP gap with the U.S. is $4 trillion or $5 trillion, rather than the $7 trillion indicated by using exchange rates for 2014. But a true global challenger also cannot be out-produced by trillions of dollars every year, on top of trailing by $45 trillion in national wealth.

If there is no Thucydides Trap now, what about in a decade or two? It is an article of faith for some that, however far behind China is economically, it is catching up fast. Official GDP growth rates would seem to confirm this, with even a slowing China’s still roughly 3 times faster than America’s.

One question, of course, is whether China’s official GDP reports can be trusted. The Communist Party does not like news of any sort that suggests instability. It is almost certain that economic data are smoothed by statistical authorities and, in the facing of slowing growth, GDP gains are currently being exaggerated to some unknown extent.

The extent of problems with Chinese government statistics is a controversial topic but it is possible to go a step further in examining the trend in comparative economic size. If annual GDP is made up of productive transactions, these should add to wealth over time. It would not occur on a 1:1 basis but, if China is really seeing a growth rate of productive transactions three times as fast as that in the U.S., the wealth gap should be closing or, at least, expanding at a slower rate.

This decade, however, has been a completely, even shockingly different story. From end-2009 to mid-2015, the U.S-China wealth gap expanded by over $25 trillion. Even the wealth ratio has begun to rise, from a low of 3.1:1 in 2011 to 3.8:1. Five years is not definitive but it is also not trivial. China is presently falling behind in private wealth, suggesting that either its GDP growth has been exaggerated or it has been unproductive over this period.

It is unlikely that incorporating the public sector would change the recent trend. That’s because the single biggest source of China’s expanding debt was the 2009 loan stimulus, primarily consisting of state-owned banks lending far more to state-owned enterprises when their ability to repay was declining. At the same time China’s private wealth was falling further behind the U.S., its public sector asset position was being undermined.

The stark stimulus failure points to an obvious way for China to reverse the deteriorating wealth trend versus the U.S.:  implement deep procompetitive reform. This is certainly possible but is not yet happening. Restrictions on labor movement will continue indefinitely, hurting the income prospects of ordinary people. The Party’s latest reform announcement indicates state sector is not to shrink, which enables more public debt accumulation and curbs private opportunities.

Inadequate reform at the moment is bad news for most Chinese. But the Thucydides Trap suggests it could be good news for most of the world. At $45 trillion smaller than the U.S. in national wealth, China is not an economic challenger in any meaningful sense. With that gap expanding considerably over the past five years and Chinese policy not yet on track, there is presently no prospect of China becoming a true economic challenger. No trap and no war risk from the trap.