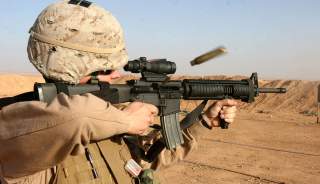 As China’s military has grown, the country’s military-industrial complex has struggled to keep up with the pace of demands. An arms embargo put in place after the 1989 Tiananmen Square massacre shut off the flow of weapons and technology transfers from the high-tech West to China. China’s state-run arms industries have acquired know-how by hook and crook, and occasionally churn out weapon systems that are entirely too similar to American designs to be a coincidence.

Introduced in 1987, the U.S. Navy’s Landing Craft, Air Cushion was a revolutionary development in amphibious warfare. Essentially a hovercraft with a flat cargo deck, the LCAC could transport sixty to seventy-five tons of cargo directly from an amphibious task force offshore at a brisk forty knots, then climbing onto the beach and depositing its cargo inland. The result is more cargo delivered faster.

The Type 726 “Yuyi” hovercraft is an exact clone of the LCAC. The Type 726 is identical in appearance to its American counterpart, but is smaller and carries less cargo. The Chinese hovercraft can carry just sixty tons, which is still enough to carry a single fully loaded Type 99 main battle tank. The Type 726 could be used to reinforce China’s fortified islands in the South China Sea or to land heavy armor in a Taiwan invasion scenario.

The original AR-15 rifle was invented by Eugene Stoner as a lightweight, select-fire expeditionary rifle for the U.S. military. Firing the smaller 5.56-millimeter bullet and using plastic furniture, the AR-15 eventually became the Vietnam-era M16. Today’s military uses the M4 carbine, a shorter version of the M16.

But the United States wasn’t the only country to crank out AR-15 rifles. NORINCO, the China North Industries Corporation, has been making and exporting a copy known as CQ for decades. The rifle is inwardly and outwardly identical to the AR-15, with the exception of an antiquated grip that looks like it belongs on an early-twentieth-century revolver and a heavily ribbed handguard. NORINCO’s copy, of course, was unlicensed. Today the People’s Liberation Army Special Forces and the People’s Armed Police Snow Leopard anti-terrorism unit use copies of the AR-15/M-4 carbine series of rifles, likely modernized versions of the CQ.

The American High Mobility Multipurpose Wheeled Vehicle, also known as the M998 Humvee, is a military 4x4 utility vehicle and the direct descendant of the World War II–era Jeep. Bigger and with a larger cargo capacity, the Humvee was used by all four arms of the U.S. military starting in 1984.

AM General tried to sell the Humvee to China in the 1980s, but the Chinese military thought the vehicle too large and unwieldy. The Chinese military changed its mind after the 1991 Persian Gulf War. One gifted Humvee and several commercially purchased vehicles were used to reverse-engineer the vehicle. The Dongfeng corporation calls its version the EQ2050.

At the time, Chinese industry could not produce a copy of the Humvee’s engine, and Dongfeng could not buy engines for military vehicles due to the embargo. Instead, diesel engines were provided by the American Cummins corporation with the understanding they would go into a dual-use vehicle with military but also civilian applications. One civilian version was built with the rest of the engines going into military versions, an interesting way to get around export laws.

The U.S. Army introduced the UH-60 “Black Hawk” helicopter into service in 1979. Fast and armored, the UH-60 could carry more troops farther and faster than the helicopter it replaced, the iconic UH-1 “Huey.” Black Hawk helicopters first saw action in the invasion of Grenada in 1983, followed by the invasion of Panama in 1989. The UH-60 saw extensive use in the 1991 Gulf War, the 1994–95 humanitarian mission in Somalia that spawned the infamous “Black Hawk Down” battle, and have seen extensive use in post-9/11 Iraq and Afghanistan.

Interestingly, the UH-60 appears to have a Chinese brother—the Harbin Z-20. The Z-20 appears to be descended from an order of twenty-four S-70C Black Hawks placed before the arms embargo. According to defense journalist Tyler Rogoway, “Noticeable changes include the cockpit area shaping, changes to its tail configuration, and above all, its rotor design.” The main rotors also have five blades instead of the Black Hawk’s four. The Z-20 has been in development for years, but does not appear to have entered widespread service with the People’s Liberation Army or People’s Armed Police.

The American Arleigh Burke–class guided-missile destroyers were the first destroyers built around the Aegis combat system. The giant SPY-1D radars, built into the ship’s superstructure, were designed to repel mass air attacks. The Burke class has become the most successful American destroyer design since World War II, with sixty-two ships built, and is capable of antiair, antisubmarine and antisurface warfare. Production of an updated version featuring the new Air and Missile Defense Radar was recently restarted, and ships of the class will continuously serve a total of fifty years—or more.

The People’s Liberation Army Navy’s Type 052D destroyers draw obvious inspiration from the Arleigh Burke class. Like the Burkes, the Type 052Ds have large, slablike phased array radars built under the bridge. Like their American cousins, the Type 052Ds pair the radar with a capable antiaircraft missile, the HQ-9, making air defense their primary mission. Similarly, they also carry antiship missiles and can carry land-attack cruise missiles, and embark a helicopter for utility and antisubmarine warfare tasks. Unlike other weapons on this list the 052D isn’t a direct copy of anything but the concept of a well-rounded destroyer with a large capital ship (China’s forthcoming carrier fleet) to protect.