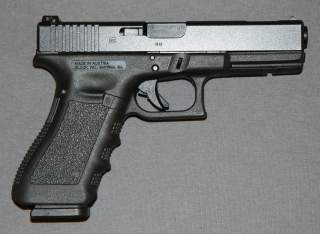 Among the many considerations a small-business owner must juggle is security. Businesses that deal in high-value merchandise that is easily moveable or that are known for moving large amounts of cash, and are located in sketchy areas, are particularly vulnerable to armed robbery. For those business owners that choose to include a firearm in their security plan there are a number of practical choices, from easily concealable handguns to carbines and shotguns.

A gun kept at a business need not be portable, just accessible, and here is where the shotgun shines. A shotgun such as the Mossberg 500 Tactical, kept discreetly out of sight, can provide quick access to devastating firepower on demand. The Model 500 carries six rounds internally, and its bead sights allow quick lineup on target. That said, a shotgun is probably not the best choice for any business with a great deal of pedestrian traffic. A shotgun is a menacing and fearful weapon and can be a significant deterrent to crime. I once visited a small shop in San Francisco’s jewelry district with a Mossberg displayed openly on the workbench. When I asked if it was loaded, the shop owner gave an ambiguous grunt.

Another long-gun option is the new Ruger PC Carbine. The PC Carbine combines the ergonomics of a short rifle with a pistol caliber, in this case nine millimeter Parabellum. The carbine takes Ruger or Glock magazines, with capacities ranging from ten to 33 rounds. The use of nine millimeter makes for a handy, pointable weapon with light recoil that can be taken to pistol ranges for target practice, an important consideration since pistol ranges are typically more numerous and nearer than outdoor rifle ranges. The PC Carbine has built-in ghost ring sights for rapid target acquisition, and features Picatinny rails on the top of the receiver and under the barrel for attachments, such as red dot sights and lights. At 34.37 inches long, the PC Carbine is short and maneuverable in enclosed spaces.

The Ruger GP-100 is a reliable, virtually fail-proof handgun with firepower than can scale up or down to suit the individual owner’s needs. The revolver features a six-chambered cylinder and can shoot both .357 Magnum, an effective man-stopper, or the less effective, recoil-friendly .38 Special. The lighter .38 Special caliber is also one of the cheapest centerfire pistol calibers, making it economical to practice with. At forty ounces, a GP-100 feels reassuringly hefty in the hand without being unduly tiring. A double-action revolver without a safety, the GP-100 is ready for action as soon as it is picked up and can be fired with a single long pull of the trigger. Extremely reliable, it can also be left unmaintained for extended periods as a business owner attends to other affairs, namely running his or her business.

The original Glock 17 handgun is a good choice for someone that wants an utterly reliable handgun with built-in safety systems but no manual lever safety. The Glock 17 can be stored in a safe place, loaded, without risk of accidental discharge if bumped or knocked to the ground. Its large, seventeen-round magazine gives the holder a reassuring amount of firepower. Slightly larger than the Glock 19, the Glock 17 weighs just two pounds fully loaded. A rail mount just forward of the trigger guard allows for installation of a variety of aiming devices, including lights and lasers.

A small, light, inexpensive American-made pistol, the Kel-Tec P-32 is one choice for business owners that prefer something small and discrete. The P-32 is just five inches long, three quarters of an inch wide, and weighs a remarkable 9.85 ounces loaded with seven rounds of .32 ACP. The double action pistol has a five pound trigger pull. The weapon has low-profile sights and a snag-free, hammerless design that won’t catch on clothing or other objects while being drawn. While the .32 ACP round is not the most powerful round available, it’s a tradeoff to achieve a highly portable, concealable pistol. With a typical street price of $230 the P-32 is the most affordable firearm on this list.