5 Big Reasons U.S.- China Ties Could Go Up in Flames (and On a Path to War) 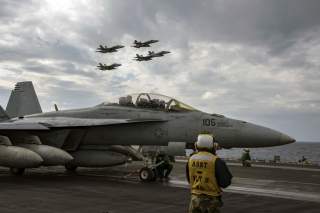 Even prior to his inauguration, President Trump has (for good or ill) unsettled the relationship between the United States and China. While Trump’s dovish instincts on Russia are well known, he (and his team) have suggested a far more controversial stance in the Asia-Pacific. Here are five areas in which both Washington and Beijing will need to tread carefully:

In recent years, the East and South China Seas (ECS, SCS and ESCS in combination) have become the focal point for U.S.-China tension.  In the East China Sea, the United States faces the dilemma of how far to support Japanese territorial integrity.  In the South China Sea, the U.S. supports a (disorganized and restive) coalition of countries opposed to Chinese territorial ambitions.

The reality of increasing Chinese military capability frames both of these problems. China can now actively threaten to seize control of both areas, creating alarm both in regional states and in Washington. President Trump’s commentary on the U.S.-led alliance system, however, have created some uncertainty over the strength of the U.S. commitment. In the ECS, Japan has hedged by marginally increasing its own military activities. Tokyo has also made clear its willingness to respond to Chinese provocation. Vietnam has responded similarly in the SCS. The Philippines, on the other hand, has increasingly taken an accommodationist stance, creating confusion and uncertainty.

And while President Trump has raised questions about his commitment to U.S. alliances, he has also made clear his interest in confronting China. Confusion and uncertainty may make the ESCS may be the place where this confrontation happens.

The U.S.-China trade relationship has driven much of global economic growth since the late 1980s. Chinese access to U.S. capital and U.S. access to Chinese labor and resources have laid the cornerstone for the post-Cold War global economy (and perhaps for its financial instability).  Through the years, both China and the United States have treated this relationship with great care, cordoning trade issues apart from political and strategic concerns.

The Trump administration has promised to change all that. President Trump has expressed plans to challenge China on a variety of trade issues, some of which go to the core of the relationship.  While China and the United States still need one another, the realization of Trump’s most confrontational rhetoric  might well spark a trade war, which could prove disruptive to the entire global economy.

The trade issue also has a cyber-component. Most observers seem to agree that China has (surprisingly) moved to moderate the worst of its cyber-espionage efforts in response to U.S. pressure. What Beijing tamped down, however, it can easily ramp back up if it sees less prospect for a positive economic and political relationship with Washington.

North Korea, or the DPRK for short, is both an opportunity and a problem for China.

The existence of the DPRK continues to prevent the expansion of the Republic of Korea (ROK) to China’s border, and continues to preoccupy defense planners in South Korea, Japan, and the United States. On the other hand, the DRPK’s antics give the U.S. a unique opportunity reaffirm its central position within the security architecture of northeast Asia, as well as to forward deploy a variety of military assets.

Even the long-anticipated-but-never-realized collapse of North Korea would pose significant problems. China wants neither massive refugee flows along its border, nor the expansion of the ROK. Yet Beijing has little interest in supporting the floundering regime and its increasingly aggressive behavior. Pyongyang could test both Beijing and Washington, bringing them into conflict in ways that they neither desire nor anticipate.

Forty-five years ago, Pakistan served as the conduit for re-opening Sino-American relations. Richard Nixon and Henry Kissinger resisted pressure to criticize President Yahya Khan over atrocities in East Pakistan, largely in order to use Pakistan to open China. Pakistan also proved a valuable ally to both the U.S. and China during the Soviet invasion of Afghanistan.

Today, the relationships between Pakistan and the U.S. has grown taut. The developing U.S. defense relationship with India, geared to large extent as a balance to China, has raised alarms in Islamabad. Continued Pakistani support for terrorism in India and Afghanistan has made many Americans wary of further engagement. On the other hand, the Chinese relationship with Pakistan has continued to blossom, witnessing extensive cooperation on military, industrial, and economic issues.

A direct U.S. confrontation with Pakistan, while unlikely, would surely drive up pressure between Washington and Beijing. The unpredictability of South Asian politics (and of President Trump) make this an area worth watching closely.

While Taiwan has long been the most important sticking point between the United States and China, the recent phone call between President Trump and President Tsai-Ing Wen has reaffirmed its centrality. In that call and in follow-up communications, President Trump suggested that he would reconsider the long-term policy of strategic ambiguity towards Taiwan.

At this point, we do not know whether Trump expects to use this threat to leverage Chinese concessions, whether he does not fully grasp the complexities of the relationships, or whether revision of the relationship will play a central role in his more confrontational stance towards Beijing. China’s leadership will need to mull this question, along with the question of how to react to a breach of the Beijing’s original “Red Line;” the international standing of the Republic of China. Miscalculation on either side could lead to a dreadful, destructive conflict.

Beijing and Washington will need careful diplomatic and defense statecraft to avoid conflict over the next four years. The Obama administration leaves a situation in flux; a pivot half complete, a dead trade deal, and an ally quite committed to disrupting the status quo. The Trump administration brings a confrontational set of attitudes on a host of important questions.  Beijing needs to figure out how to manage Washington, and Washington needs to figure out what it wants.