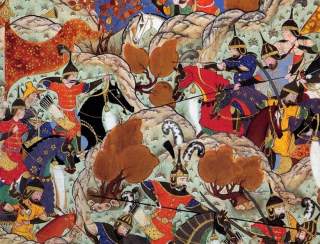 As the battle for Aleppo, in Syria, rages on, it is striking to note that Syria has a particularly long and bloody history, even by the standards of the Middle East. This is particularly true of a strip of land in the historical region of greater Syria. Consisting of a north-south axis stretching from southern Turkey, through all of Syria, and into northern Israel, this region has been a battlefield for great empires since ancient history.

Why? The answer is geography. Syria—and in particular western Syria—is littered with countless battle sites, because it is situated on the most traversable route between the major centers of power in the Middle East. Much of the southeast of modern Syria is desert, so an army coming from up from Mesopotamia (Iraq) or Persia (Iran) cannot strike due west; it has to travel up the Euphrates River in a semicircular direction, moving north, then west, and finally back south along the Mediterranean coast. Likewise, an army coming down from Turkey or Europe, like those of the Ottomans, Alexander the Great or the Crusaders, has to pass through western Syria to get to Egypt or the Arabian Peninsula. The converse holds true, as armies from Egypt have historically seen this route as the easiest path to Turkey and Iraq. It is no surprise that Syria’s pivotal location has long been the series of disputes and wars. Modern powers, including the United States, Russia, Turkey, Iran and Saudi Arabia, as well as ISIS, all understand this, which is why the fight for Syria is so fierce.

Fighting over greater Syria was just as fierce in premodern times. Here are five notable battles fought in this region—for some other important historical battles fought nearby, see my other articles on important battles in the Middle East and the five hundredth anniversary of the Battle of Marj Dabiq:

The Battle of Kadesh was a clash between the superpowers of the ancient Middle East: Egypt and the Hittites. Fought in 1274 BCE in northwestern Syria, near today’s border with Lebanon, it was technically a draw. The battle is of particular importance to history because it is the earliest recorded battle for which details and tactics are known. Interestingly, it was the largest chariot battle in history, with about six thousand chariots involved. Additionally, the subsequent peace treaty is the oldest peace treaty surviving today.

The battle came about because of the rivalry between the Hittites (based in modern Turkey) and the Egyptians over control of the rich city-states of the Levant. The new Egyptian pharaoh, Ramses II, came north with an army to capture the city of Kadesh, but found himself cut off from his main army when he moved too quickly and almost rode into a Hittite ambush. However, the Egyptians were saved from defeat by the arrival of the main body of their army and the tenacity of Ramses II.

The Battle of Yarmouk was one of the most consequential battles in human history. Fought in 636 CE between the newly established Muslim Arab caliphate and the Byzantine Empire, near the Syrian borders with Israel and Jordan, it opened the way to the Muslim conquest of the entire Levant, including the cities of Aleppo and Jerusalem. The path to the battle began with the Muslim conquest of Damascus in 634. In retaliation, the Byzantines sent an army to Syria to clear it of Arab raiding parties. However, the Byzantine army wasn’t at its best, because it had spent most of the past three decades fighting the Persians, who had previously occupied Syria.

Nonetheless, the Byzantine army was numerically superior to the Arab forces. In order to counter this advantage, the Arab forces scattered through Syria consolidated at Yarmouk under the esteemed Arab general Khalid Ibn al-Walid. The Arabs then defeated the Byzantine forces over six days due to superior morale and motivation, breaking the Byzantine cavalry. Subsequently, Muslims took over Palestine, the rest of Syria, and Egypt.

The armies of the First Crusade reached Antioch (in modern Turkey, near Syria), an important city on the route to Jerusalem in 1097. However, what ensued was a long siege, lasting from October 21, 1097, to June 2, 1098. After the main siege, where the Crusaders took the city but not its citadel, they found themselves besieged as well by a relieving Muslim army from Aleppo, but eventually prevailed.

The Crusaders were driven hungry and possibly insane by these circumstances. As a result, they went raiding throughout Syria, reaching the town of Ma’arra, thirty-five miles north of modern Hama, in July 1098, where they were defeated. However, they returned in November and captured the city on December 12, 1098. While the Muslim garrison surrendered under the hope of safe conduct, one of the most notorious incidents of the Crusades soon commenced in Ma’arra. The Crusaders, who were starving at this point, began to eat the inhabitants of the city. According to a contemporary chronicler, the Crusaders “boiled pagan adults in cooking-pots, impaled children on spits and devoured them grilled.” Then then proceed southward, local resistance broken, and captured Jerusalem in 1099.

The battle outside and siege of Damascus in 1400 by the Central Asian warlord Timur quickly acquired notoriety throughout the world. Although Timur claimed to be the champion of Islam, he also claimed to be the heir of Genghis Khan. His atrocities were much worse, and most of his campaigns were against Muslim powers. One of his particular habits involved constructing pyramids out of human heads in towns he conquered.

As was the case throughout much of history, Egypt was the dominant power in Syria when Timur invaded. The Mamluk rulers of Egypt proved ineffective. Timur first attacked Aleppo, where he built a tower of twenty thousand skulls. He then defeated the army of Mamluk sultan Nasir-ad-Din Faraj near Damascus. During the subsequent siege, the famous Arab historian Ibn Khaldun was lowered from a basket from the city and interviewed Timur several times. Especially interesting were some of Ibn Khaldun’s musings on why Timur was so successful: group solidarity. He told Timur: “You know how the power of the Arabs was established when they became united in their religion in following their Prophet. As for the Turks [followers of Timur] . . . in their group solidarity, no king on earth can be compared with them, not Chosroes nor Caesar nor Alexander nor Nebuchadnezzar.” Much impressed, Timur exchanged gifts with Ibn Khaldun and sent him on his way.

Yet, despite a promise to spare Damascus, he soon plundered, destroyed and wrecked that city when it fell. The famous Umayyad Mosque as burned, and a tower of heads was built; there is still a square in Damascus called Burj al-Ru’us, or the Tower of Heads. Timur’s invasion caused Syria to fall into decline and feuding, both internally and with its Egyptian overlords—something the Ottomans took advantage of a century later. Aleppo suffered less than Damascus and, after the invasion of Timur, gradually became the region’s main city until modern times.

After the Ottomans defeated the Mamluk rulers of Egypt in the Battle of Marj Dabiq in 1516, Turkish rule over Egypt and Syria commenced for over three hundred years. However, after Napoleon invaded Egypt, the region became de facto independent under its Ottoman governor Muhammad Ali in 1805. Muhammad Ali’s ambitions extended beyond merely controlling Egypt. He said, “I am well aware that the Ottoman Empire is heading by the day toward destruction. . . . On her ruins I will build a vast kingdom . . . up to the Euphrates and the Tigris.” Of course, this involved invading Syria, both in order to take over the Levant and to get to Constantinople.

In 1831, a huge Egyptian army under Ibrahim Pasha, son of Muhammad Ali, advanced into Syria, capturing all of its major cities. An Ottoman army met the Egyptian army at Homs on July 9, 1832, defeating it using the superior weaponry and training the Egyptians had acquired from European advisors. The Ottoman army, which consisted of four infantry regiments, three cavalry regiments and fifteen thousand irregulars, was destroyed, with two thousand killed and three thousand taken prisoner. The Egyptians retained control of Syria amid further victories, and an Ottoman attempt to retake Syria failed in 1839. Following this attempt, the entire Ottoman navy defected to Muhammad Ali and it looked as though the Ottoman Empire would collapse. However, in order to preserve a balance of power in the region, the British and Russians intervened to prop up the Ottomans and drive the Egyptians from Syria. Thus, a large, strong state in the Arab world was prevented from being formed, and Ottoman rule continued over most of the Middle East until World War I.