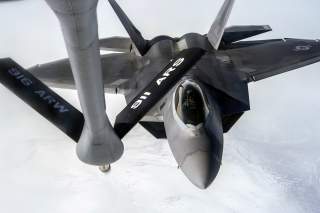 The nations with the five largest defense budgets last year accounted for 60 percent of global military spending according to a newly released study.

This week, the Stockholm International Peace Research Institute (SIPRI) released its annual report on worldwide defense spending. Unsurprisingly, the United States led the way again with military expenditures of $610 billion, accounting for 35 percent of the worldwide total. China followed with $228 billion in estimated defense spending, or roughly 13 percent of global expenditures. They were followed by Saudi Arabia ($69.4 billion), Russia ($66.3 billion) and India ($63.4 billion). These five nations collectively spent just under 60 percent of the $1.74 trillion spent on the military around the world in 2017. Together, the top fifteen nations by defense spending—which were the same countries from last year—accounted for 80 percent of global defense spending.

The worldwide military spending total of $1.74 trillion represented a 1.1 percent increase in real terms from 2016. This marked a change from 2012–2016, when global defense spending had remained relatively constant, according to SIPRI. Before then, worldwide defense spending had steadily increased from 1999–2011. The military expenditures last year were equal to 2.2 percent of global GDP, or $230 per person worldwide.

“The increases in world military expenditure in recent years have been largely due to the substantial growth in spending by countries in Asia and Oceania and the Middle East, such as China, India and Saudi Arabia,” Dr. Nan Tian, a Researcher with the SIPRI Arms and Military Expenditure (AMEX) program, was quoted as saying in a press release. “At the global level, the weight of military spending is clearly shifting away from the Euro–Atlantic region.” Still, seven of the top fifteen largest defense budgets came from NATO members (the United States, France, Britain, Germany, Italy, Canada and Turkey) and Russia is another European nation on that list. By way of comparison, the only strictly Asia-Pacific nations within the top fifteen were China, India, Japan, South Korea, and Australia—although the United States and Russia are Pacific nations.

By far the biggest increase in military spending over the past decade has come from China. Since 2008, Beijing’s defense budget has skyrocketed by 110 percent. Among the other top fifteen spenders, the next biggest increase was 46 percent by Turkey. Thus, China’s military spending increases were more than twice as large as that of any of the other significant nations over the last decade. China also led the world in increases for the decade leading up to 2008. “China had both the largest absolute and the largest relative increase” from 1999–2008 the SIPRI report for 2008 said. At that time, Chinese defense military accounted for 5.8 percent of worldwide expenditures; as noted above, it now accounts for 13 percent. During the same period, America’s share of global military spending declined from 42 percent in 2008 to 35 percent today.

One of the biggest surprises in the new SIRPI data is the precipitous decline in Russian military spending. “At $66.3 billion, Russia’s military spending in 2017 was 20 percent lower than in 2016, the first annual decrease since 1998,” SIPRI reported. Siemon Wezeman, a Senior Researcher with the SIPRI AMEX program, reflected: “Military modernization remains a priority in Russia, but the military budget has been restricted by economic problems that the country has experienced since 2014.” Of course, most Russian defense spending is done in rubbles rather than dollars, so changes in the ruble's value can affect dollar-denoominated figures without changing Moscow's purchasing power to the same extent.

This decrease was not entirely unexpected. IHS Jane’s last year had noted that Russia’s Federal Treasury released budget figures that indicated a 25 percent decline in military spending, the most since the 1990s. But, Michael Kofman, a Russian military expert at the CNA Corporation, argued at the time that this figure was misleading. According to Kofman, Russia's 2016 military spending had been artificially inflated by a one-time loan payment of $13.8 billion from Russia's Ministry of Finance. The loan was to help the military reduce defense sector debt. It is unclear if SIPRI’s data accounted for this loan or not.

Regardless, Saudi Arabia still overtook Russia as the nation with the third largest military budget. Although Riyadh’s military spending had temporarily decreased in 2016, it has been mostly been on the upswing in recent years as the kingdom pursues a more ambitious foreign policy to counter Iran. Overall, Saudi Arabia’s military spending increased by 9.2 percent last year. This was actually less than both Iran (19 percent increase) and Iraq (22 percent increase) but higher than the 6.2 average increase for the Middle East as a whole. Still Saudi Arabia spent roughly four times as much as Iran on its military last year, the latter of which spent $14.5 billion.