5 Reasons Russia and China Might Not Be Able to Sink a U.S. Aircraft Carrier 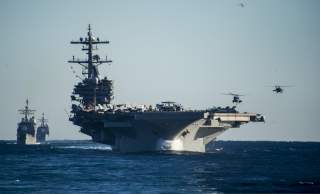 Nobody really doubts the utility of large-deck carriers. There's nothing else like them, and the United States is the only nation that operates a fleet big enough to keep three or more carriers continuously deployed at all times.  However, two issues have come up over and over again since the Cold War ended that have led at least some observers to question why carriers are the centerpiece of America's naval fleet.  One concern is that they cost too much.  The other is that they are vulnerable to attack.