5 Russian Super Weapons That Never Made it to the Battlefield 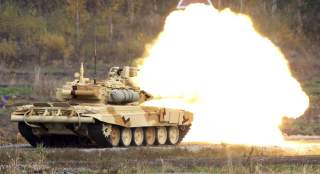 Designed to hit Mach 3, with a service ceiling of around 70,000’, the T-4 resembled the B-70 visually, and in capability.  However, because the organization of airpower in the Soviet Union differed from that of the United States, T-4s were also considered for tactical missions, such as reconnaissance and the delivery of anti-ship missiles.  The idea of a T-4 carrying Kh-22 anti-ship missiles is very scary indeed.

However, the demands of the technology proved too great for the USSR to move to production. The tolerances required for such high speeds and altitudes were probably beyond the capacity of the Soviet aviation industry to reliably produce.  Moreover, the T-4 suffered from many of the same intercept and SAM issues as the B-70. Much as the case with the B-70, the T-4 spawned its successor, the swing-wing Tu-160. Only 35 of the latter were built, arriving roughly a decade after the projected service date of T-4.

Had the USSR pursued the T-4, it would have had to give up on large portion of its tactical air fleet.  However, it would also have had a high-level, supersonic bomber designed (in part) to deliver anti-ship missiles.  This would have complicated the defense of US carrier groups even more than the arrival of the Tu-22M, a smaller, shorter ranged bomber.  Production of the T-4 might also have wrought changes in US procurement, with potentially greater focus on the B-1A, and on the strategic interceptor force.  Although extremely expensive to maintain, at least some of the T-4 force would likely have survived the collapse of the Soviet Union to serve in the Russian Air Force.

Robert Farley is an assistant professor at the Patterson School of Diplomacy and International Commerce. His work includes military doctrine, national security, and maritime affairs. He blogs at Lawyers, Guns and Money and Information Dissemination and The Diplomat. Follow him on Twitter:@drfarls.'