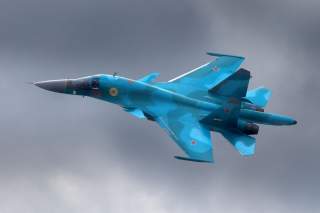 Given recent events, just like its counterpart discussing the five Turkish weapons that Russia should fear, this article covers the weapons that Russians could use in a limited engagement in Syria and the eastern Mediterranean. As such, Russia’s ballistic missile capabilities or U.S. tactical nukes based in Turkey will not be part of the analysis because they are virtually useless in a limited engagement.

Since 2008, the Sukhoi-34 “Fullback” fighter-bomber has been replacing the older Tu-22M and Su-24 bombers. Su-34 possesses a state-of-the-art fire control system, a phased array radar, and a powerful electronic countermeasures (ECM) suite. Compared to Turkey’s F-16, Su-34 can carry more weapons and fuel so it enjoys a longer range. Russia currently has more than eighty Su-34s, of which about fifteen are based in Syria.

Following the Nov. 24 incident, we should expect the Su-34 to assume a greater role in air-to-air engagements with the F-16. The latest addition to Russia’s air arsenal is better at defending itself and boasts high maneuverability—all of which makes the Su-34 a tough nut to crack for the Turkish F-16.

The Su-34 becomes an even deadlier adversary when we take into consideration its AA-10 and AA-12 air-to-air missiles. Especially the AA-12’s long range of approximately sixty miles (100 kilometers), compared to Turkey’s U.S.-made AIM-120 AMRAAM’s thirty miles (fifty kilometers), could cause greater damage to the Turkish side in an air battle.

The Krasukha-4 jammer is the newest electronic warfare system in the Russian arsenal. As a broadband multifunctional jamming platform, Krasukha-4 could disrupt ground-based radars, airborne radars (especially AWACS systems) and low earth orbit satellites. The jammer is said to cause permanent damage to targeted radio-electronic devices.

The Russian contingent in Syria is believed to possess a Krashuka-4 platform, which has a reported range of 300 kilometers, putting it at an advantage against the Turkish KORAL jammer. Krasukha-4 could blind TuAF’s Peace Eagle AWACS planes and make it difficult for the Turkish side to generate the air picture of the eastern Mediterranean and Syria, and undermine its ability to coordinate scramble and interception missions against the Russians.

The Slava-class cruiser, however, is not without its problems. For one, only Moskva is in a position to threaten Turkey because her fellow Slavas, Marshal Ustinov and Varyag, serve in the Baltic and Pacific, respectively. More important, the Slava-class lacks effective anti-submarine warfare (ASW) capabilities against such silent and deadly Turkish submarines as the Gür-class. The effectiveness of Russia’s Krivak- and Krivak II-class frigates, which accompany the Moskva for ASW duty, is up for debate.

“Spetsialnoye Naznachenye” (Special Purpose Forces) is a general designation for Russia’s special commando units. These highly trained operatives carry out a broad range of missions, including, but not limited to, long-range patrol, scouting, sabotage, subversion, guerilla warfare and targeted killing. The Spetsnaz proved their mettle mostly recently as “little green men” during the surprise invasion of Crimea in February 2014 and the subsequent fighting in eastern Ukraine, which left Russia as the clear winner.

Russia’s elite commandos are probably the most clear and present danger to Turkey at the moment. At a time when Ankara’s fight with the military group Kurdistan Workers’ Party (PKK) is intensifying in southeastern Turkey, even as Syrian refugees continue to come in, it is not unthinkable for highly trained Russian troops to sneak into Turkish territory and create mayhem.

In every recent international crisis in which Russia has taken part, Moscow’s adversaries have suffered extensive cyber attacks. During the 2007 crisis with Estonia, the South Ossetia war with Georgia in 2008 and the occupation of Crimea and the war in eastern Ukraine in 2014-15, Russia proved its qualitative and quantitative edge in cyber warfare. Coupled with Moscow’s abilities in psychological warfare—manipulation of media, instigation of local populations, and demoralizing enemy forces—Turkey would be wise to pay close attention to this Russian asset.

We hope that Turkey and Russia de-escalate tensions in Syria. A war, even one limited in scope, would be too hurtful to both sides. But if Ankara and Moscow were to take things to the next level, these five weapons would give the Russian side some unique advantages.

Bleda Kurtdarcan is a lecturer at Galatasaray University School of Law in Istanbul, where he teaches public international law. He obtained his Ph.D. from Galatasaray University in 2014 and his LLM from Université Paris 1 Panthéon-Sorbonne in 2005. He specializes in law of armed conflict, law of the sea, maritime security, and the privatization of military services.

Barın Kayaoğlu is an independent political analyst and consultant in Washington, D.C., where writes and comments for U.S. and international media outlets. Barın finished his doctorate in history at the University of Virginia in 2014, and he is currently turning his dissertation into a book, tentatively titled Loving and Hating America: U.S. Diplomacy, Modernization, and the Origins of Pro- and Anti-American Sentiment in Turkey and Iran. You can follow him on www.barinkayaoglu.com, Twitter (@barinkayaoglu), and Facebook (Barın Kayaoğlu).