5 Super Israeli Weapons of War That ISIS Should Seriously Fear 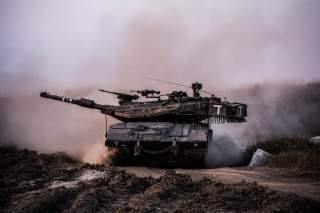 Back in 2014, as Islamic radicals were still on a tear taking large swathes of Iraq and Syria, Israeli strategists worried that Israel could become the next target of groups like Islamic State (IS) and the al-Nusra Front.

Such a battle seems unlikely. Israel must prepare for conflict with Iran, Hamas and Hezbollah, while IS is busy trying to hold on to its conquered territories—and battling the Iraqi and Syrian governments, as well as the Kurds and any other groups they have antagonized.

Yet the ignominious withdrawal of the forty-year-old plus UN peacekeeping mission on the Golan Heights, after rebels fought and kidnapped Fijian and Filipino peacekeepers back in 2014, means there is no longer a buffer zone between the Jewish state and jihadi groups who are ideologically compelled to destroy it.

In the past IS has racked up remarkable successes against Iraqi and Syrian government forces. Israel would be a different matter.

Here are five of the most formidable Israeli weapons that IS radicals won't appreciate:

IS made out like a bandit when they captured an arsenal of U.S. tanks, artillery and other equipment from fleeing Iraqi government forces last summer. They have reportedly moved some of these weapons to Syria. This means that advanced Israeli weapons could be pitted against advanced American tanks.

Thus we could see Merkava Mark IVs battling M-1 Abrams. Yet before all the treadheads start placing bets, this wouldn't be a fair comparison of which is the better tank. The M-1s captured from the Iraqis won't have the latest U.S. technology, and worse yet, they won't have proper maintenance and logistics.

Nonetheless, it would be an interesting battle between two very capable armored vehicles. Ironically, the M-1 and the Merkava IV both use nearly similar versions of Germany's Rheinmetall 120-millimeter gun. Both tanks are also famous for their armor protection, but comparing armor protection is tough because there are so many classified factors such as the materials that compose the armor. Some Merkavas will have the Trophy active-protection system that shoots a barrage of ball bearings to intercept incoming rounds. As for the older Russian-made tanks that Islamic State has captured, the Merkava IV will slice through them like a HEAT round through butter.

This won't be the first time that Israel has faced American arms; the IDF battled Jordanian M-47 Pattons in 1967. But back then, Israel relied on American-made Pattons and Israeli Centurions. This time, the Merkava IV is an Israeli-made weapon.

Regardless, even if Merk and Abrams don't meet, the Merkava IV gives Israel a major advantage in a ground war between Israel and IS. The Golan Heights isn't exactly ideal tank country, but on the other hand, Israeli tank crews aren't about to abandon their weapons to the jihadis. While IDF armor performed dismally in the 2006 Lebanon War, training and readiness have substantially improved as shown during operations in Gaza. One question is whether IS possesses advanced anti-tank weapons captured in Syria or Iraq, or whether TOW missiles that the United States supplied to "moderate" Syrian rebels will end up in IS’ armory.

Just as U.S. airstrikes in Iraq have targeted IS tanks and artillery, the Israelis will be hunting down armor, armed pickup trucks and any other target they can find.

Israeli Apache helicopters use the Hellfire, but another missile that Israel will likely employ is the Spike, a family of several types of missiles launched from aircraft, helicopters, vehicles or dismounted soldiers. Various models have a range of 2.5 to 25 kilometers, with the missile climbing and then descending at a sharp angle to strike a tank on its thin top rather than its more thickly armored front.

In theory, an even more devastating weapon should be Israeli AH-64D Apache attack helicopters used for close air support. However, the Islamic State may have captured sophisticated SA-24 man-portable anti-aircraft missiles in Syria, which may give the IDF pause before it deploys attack helicopters.

Keeping constant watch on a fast-moving irregular army is vital. Fortunately, Israel has pioneered the development and use of modern unmanned aircraft. Its latest offering is the Super Heron reconnaissance drone, a souped-up version of the Heron that is used by France, India, Turkey and other operators. The Super Heron can fly for more than 45 hours at an altitude of 30,000 feet and a speed of more than 170 miles per hour.

Many jihadis became accustomed to operating in Iraq despite the presence of U.S. drones. Yet the Super Heron, equipped with visible light and infrared cameras, radar and SIGINT receivers, will give the IDF a potent aerial-surveillance capability.

Perhaps the most formidable weapon in Israel's anti-jihadi arsenal isn't explosive. It's digital. Unit 8200 is the Israeli military's signals intelligence (SIGINT) unit, Jerusalem's equivalent of the National Security Agency. For a small country of 8 million people, Unit 8200 gives Israel a huge global capability for tapping communications and conducting cyberwarfare across the Middle East and on a global basis. If suspicions are true that the Stuxnet virus at least partly originated from Israel, then Unit 8200 was probably involved.

SIGINT may not confer a decisive advantage, but it will enable Israeli commanders to monitor jihadi movements and—like the United States—identify key leaders for targeted assassination by aircraft or drone.

Editor's Note: This first appeared in a slightly different format in Sept. 2014 and is being reposted due to reader interest.