5 Triggers for a New Korean War 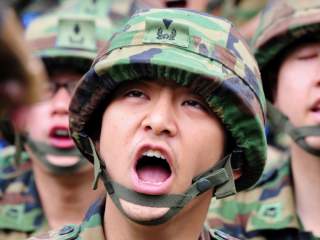 Question: Which scenario is most likely to trigger a new Korean War?

However, any intelligent speculation must assume rationality to properly handicap outcomes; and once you cross the 38th parallel into the hermitic and Stalinist kingdom of North Korea, all bets are off on a police state run by a young, erratic megalomaniac. This absence of rationality means that all of the above scenarios are on the table. So, let’s examine how each might lead to war.

Suppose that despite massive Chinese aid, the North Korean economy finally does fall of its own weight. Millions of North Korean refugees would then begin streaming into South Korea and north across the Yalu River into China. With the North Korean army suddenly in a rogue—and perhaps fugue—state, and with North Korea’s nuclear weapons in the hands of 'God knows who,' South Korea and the United States decide it is in the best interests of peace to send troops into North Korea to find and secure those nuclear weapons and bring about a rapprochement between the two countries.

Of course, China will likely send in troops as well; and the only question becomes: What happens when Chinese, North Korean, South Korean and American troops meet? It is far too easy to see how things might quickly escalate.

Here, history might easily repeat itself. The North Koreans have shot down a U.S. plane, sunk a South Korean ship, felled a civilian airline and, most recently, lobbed artillery shells and rockets at defenseless South Korean citizens. However, South Korea appears to have reached it breaking point on such provocations.

After defeating a far more liberal opponent in 2012, South Korean President Park Geun-hye vowed in 2013 to respond to any new North Korean provocation “swiftly and decisively” and without any regard for “political considerations.” She also promised that North Korea would be “erased from the earth” if it ever launched a nuclear attack.

Might the United States preemptively bomb North Korea’s nuclear facilities as a means of denying it the capability to produce additional nuclear weapons? The United States and Israel have had this very same debate over whether to preemptively bomb Iran’s nuclear centrifuges so this scenario is hardly far-fetched. An additional fear here is that North Korea might sell fissionable material to some of the most dangerous actors on the world stage—from Iran itself and Pakistan to terrorist organizations like Al Qaeda and ISIS.

The only reason this Preemptive Strike Scenario may be improbable is that North Korea’s nuclear genie is already out of the bottle. In 2003, while President George Bush’s national security team was preparing to invade Iraq, North Korea used this distraction to clandestinely move from its civilian nuclear reactor facility more than 8,000 spent fuel rods for reprocessing. It now has enough weapons-grade plutonium squirreled away in unknown locations out of reach of U.S. bombs to qualify as a legitimate nuclear power.

If North Korea launched one or more nuclear-tipped missiles aimed at South Korea, Japan or the United States, one likely U.S. response might be a retaliatory nuclear strike that would fulfill President Park Geun-hye’s promise of “erasing” Pyongyang from the face of the earth. While it would be difficult for China to disagree with the righteousness of such an American response, there is still the matter of U.S. nuclear-tipped missiles being launched at least in the direction of China. If China were to fear some of those missiles might be coming its way, anything might happen.

The most unsettling aspect of the “North Invades the South Scenario,” is its “tyranny of proximity.” While the capital of North Korea, Pyongyang, is almost one hundred miles from the 38th parallel dividing North and South, the South Korean capital of Seoul is a mere thirty miles from advancing North Korean troops and tanks. If nothing else, this strategic advantage provides a perennial enticement to a North Korean military perhaps eager for a fight.

Of course, it is unlikely that the United States would ever allow itself to be drawn into another land war in Korea should such an invasion occur. Instead, America would use its air and naval power to help the South Koreans repel any invasion and then quickly neutralize the North. As former Marine fighter pilot and Pentagon insider Ed Timperlake has bluntly described:

“First and foremost, you have to kill and cripple the command structure of the dear leader because he can press a button and launch a nuke. He's proven he has them. So you have to attack immediately.  It's going to be horrible. But if you resort to a symmetric fight, a ground fight, with North Korea, you've lost the battle before you've begun. You have to take him out and take him out brutally and quickly.”

But again, once North and South engage “brutally and quickly” with America in the mix—either on land or in the skies—China would be hard-pressed to remain on the sidelines. It is because of these five possible triggers for war that the United States and its Asian allies must have clearer contingency plans—and why the 2016 presidential candidates each need to have a detailed plan indicating their solutions.

Peter Navarro is a professor at the University of California-Irvine.  He is the author of Crouching Tiger: What China’s Militarism Means for the World (Prometheus Books) and director of the companion Crouching Tiger documentary film series. For more information and to access film interview clips, visit www.crouchingtiger.net.