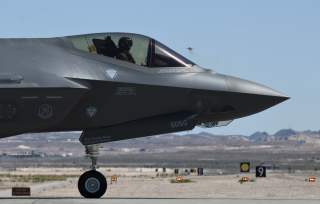 The F-35 Joint Strike Fighter might just be the most controversial American weapons program of all time—and for good reason.

The fighter, with a total cost coming in at $1 Trillion over its lifespan, promises game changing capabilities, but has had its share of setbacks and technical challenges over the years. And now, the program is under attack by President-elect Trump. Yikes.

So can the program be replaced? What would be the alternatives? For example, could we just build more F-22s? Or maybe make more 4th generation fighters? How about just more drones and forget the whole manned fighter concept?

Back in 2014, frequent TNI contributor Robert Farley pondered this question. We have posted his ideas below for your reading pleasure once again.

If we could kill the F-35, the ideal solution would likely involve a combination of two, three, and four, with different recipes including different amounts of each.  Thus, a different way of phrasing the question that motivates this article is “how many UAVs and legacy aircraft would we need to make it to Generation Six?” If the United States does not envision air combat against a peer competitor within the next decade and a half, finding the right mix might well be possible.