60 Years Ago, Russia Launched Sputnik (And It Can Teach Us A lot about North Korea) 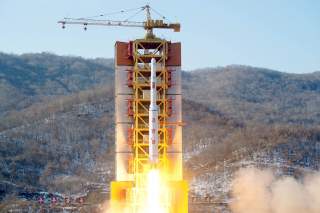 In the immediate aftermath of the Second World War, the United States assumed that it would be the world’s economic and technologically dominant power—which it was. However, that confidence was shaken on Oct. 4, 1957, when the Soviet Union launched the world’s first satellite—Sputnik—into orbit.

“There was a difference between orbiting Sputnik and accurately delivering a nuclear weapon to a target via an ICBM, but such subtleties were lost in the hubbub surrounding the headlines,” Pomeroy wrote.

“The perception was that not only had the Soviets kept pace with American science and technology, they had demonstrated superiority, and because they had fission and fusion weaponry, they could launch nuclear-armed missiles at American soil.”

As Pomeroy noted, while the technology is similar to that of an ICBM, a space launch vehicle does not have many of the necessary components of a military nuclear delivery vehicle. What is correct, however, is that Sputnik represented real Soviet technological progress towards developing an ICBM capability.

“The R-7 was as complicated and unwieldy as early American ICBMs, requiring thirty-two engines to ignite at liftoff, but it flew fifteen months before the Atlas successfully flew 2,500 miles on December 17, 1958,” Pomeroy wrote.

“The R-7 test was not a complete success because upon reentry, the dummy warhead disintegrated at an altitude of ten kilometers, but the Soviets had not yet completed the re-entry vehicle design, and in any event, it was enough to show that the rocket worked.”

“Defense officials stressed that four years was the typical amount of time required to develop an operational system from a test vehicle, which provided the United States enough time to complete its own missile programs.”

As was the case in 1958, today, the Pentagon is trying to explain to a hyperventilating nation that the North Korean ICBM is not yet an operational weapon. It will be eventually, but it will take a lot more testing and it will definitely take more time.

But while President Dwight D. Eisenhower tried to minimize the threat, knowing that there was no genuine missile gap, the panic was genuine. Indeed, in some ways, the rhetoric of the time was similar to the bluster of today.

“The Soviet Army today possesses such armaments and such firepower as no army has ever had,” Soviet leader Nikita Khrushchev said in 1960.

“I want to re-emphasize that we already have such an amount of nuclear weapons--atomic and hydrogen weapons and an appropriate number of rockets to deliver them to the territory of a potential aggressor--that if some madman were to provoke an attack on our country or on other socialist countries, we could literally wipe the country or countries attacking us off the face of the earth.”

Unfortunately, such bluster can be heard today during our current crisis. But Khrushchev—as is likely the case with North Korean dictator Kim Jong-un—was bluffing to cover for his weak position.

“In 1960, the Soviet Union had two ICBMs, and each of those carried one warhead. He did have sixty-three SLBM launchers and warheads, but the best of these missiles had a range of no more than 600 kilometers; moreover, his bomber force consisted of 138 aircraft and 239 weapons, not an insignificant number but hardly large when compared to its American counterpart.”

Then as now, the United States looked at many options to disarm the Soviet nuclear forces using “counterforce” capabilities, but ultimately Washington moved back to the traditional mutually assured destruction construct of deterrence.

“Despite the new attack options incorporated into the SIOP [Single Integrated Operational Plan], the Kennedy administration quickly moved away from a pure counterforce strategy and back towards assured destruction,” Pomeroy wrote.

“In the end, admitting that no one strategy sufficiently encompassed the vagaries of nuclear war, the United States combined the strategies of counterforce and assured destruction with a high-level of finite deterrence.”

That was then, this is now. One can only hope that cooler heads will prevail.