7 Facts About the U.S. State of the Union 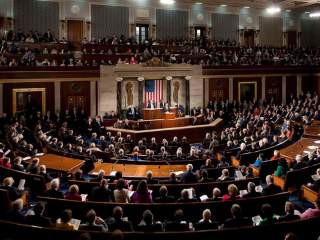 President Barack Obama is set to deliver his final State of the Union address tonight. The White House says it will be a “non-traditional” speech that will take a “big-picture approach to some of the challenges and opportunities that we face” as a country. In doing so the president hopes to frame the public debate heading into an election year. His odds of succeeding are daunting, in large part because the power of the bully pulpit is greatly overrated. But as they say, you can’t win if you don’t play.

The New York Times, the Washington Post, NPR, and Politico are just a few of the many media outlets previewing the speech. Rather than add to that onslaught, here are seven facts about the State of the Union that you may not know.

1) The U.S. Constitution requires the president to deliver a State of the Union address to Congress. Article II, Section 3 stipulates: The president “shall from time to time give to the Congress Information of the State of the Union, and recommend to their Consideration such Measures as he shall judge necessary and expedient.” Although the Constitution doesn’t define “from time to time,” by tradition the president conveys that message once each year.

3) For more than a century, the State of the Union was delivered to Congress in writing rather than in a speech before a joint session of Congress. George Washington delivered the first State of the Union address—or “Annual Message” if you prefer—in person to Congress. John Adams did likewise during his one term in office. Thomas Jefferson, however, abandoned the in-person speech for the written message, perhaps because he wasn’t a great public speaker. The practice of a written annual message persisted until 1913, when Woodrow Wilson revived the practice of giving a speech. Ever since FDR’s time, presidents have almost always used speeches rather than written messages to fulfill their constitutional obligation to inform Congress about the State of the Union.

6) Two presidents never delivered an Annual Message or State of the Union Address. William Henry Harrison and James Garfield both died before they had the chance to deliver one, Harrison from pneumonia in 1841 and Garfield from an assassin’s bullet in 1881.

James M. Lindsay is a senior vice president, the Director of Studies and Maurice R. Greenberg Chair at the Council on Foreign Relations. This article first appeared in the Water’s Edge.

Image: Flickr/Architect of the U.S. Capitol.