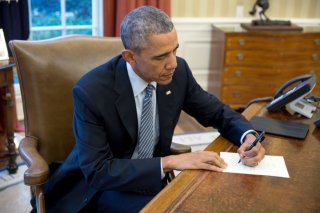 In the wake of the Orlando terrorist attack, the Obama administration has been quick to blame gun control laws. This is because the administration refuses to admit its policies to defeat the Islamic State have failed.

Gun control will not stop this rise in Islamist terror attacks, and the president is wrong to suggest so. To stop these attacks and defeat radical Islamism, the U.S. needs to defend the U.S. homeland and combat terrorism abroad.

We must maintain essential counterterrorism tools to help law enforcement and intelligence agencies find and stop terrorists before they attack.

Here are seven policies that will help prevent another Orlando:

So long as the Islamic State, also known as ISIS, maintains territory in Afghanistan and Iraq, it will be a persistent terror threat.

Rolling back—and defeating—ISIS requires a global approach in which the U.S. leads a multipronged, multination effort that seeks to deny ISIS the ability to hold territory. This will disrupt its recruitment of foreign fighters, and will counter its destructive ideology.

One part of the solution must be military. ISIS derives much of its cachet and legitimacy from its success. Driving ISIS from its conquered territories will undermine the group’s legitimacy in the eyes of aspiring jihadists, thereby hurting its ability to recruit.

2. Shut Down the Foreign Fighter Pipeline

In order to defeat terrorism abroad, the U.S. must lead an international effort to deny ISIS territorial gains and shut down the foreign fighter pipeline. While military victory would undermine ISIS’ legitimacy, the U.S. must also improve intelligence capabilities to identify potential recruits and preempt Islamist violence.

This requires hard intelligence work and even closer coordination between countries to identify suspicious travel. This includes pushing allies to take greater intelligence and security measures that reflect the global nature of the threat.

State, local, and private sector partners must send and receive timely information from the FBI. Despite the lessons of 9/11 and other terrorist plots, the culture of the FBI continues to resist sharing information with state and local law enforcement.

Mass shootings in busy areas will always be a threat given America’s free society. Since state and local law enforcement officers will be the first to respond, training for active shooter events should be expanded through existing programs such as the Active Shooter Threat Training Program and corresponding instructor training program.

The U.S. should facilitate strong community outreach and policing. Such capabilities are key to building trust in local communities, especially in high risk areas. If the U.S. is to thwart Islamist terrorist attacks successfully, it must do so by putting effective community outreach operations at the tip of the spear.

Support for important investigative tools is essential to maintaining the security of the U.S. and combating terrorist threats. Legitimate government surveillance programs are also a vital component of U.S. national security and should be allowed to continue.

The U.S. needs a strong, proactive counterterrorism policy in order to prevent future terrorist attacks like Orlando. We cannot afford to play politics when national security is at stake. The U.S. must do more both at home and abroad in order to uproot and defeat Islamist terrorism.