70 Percent of Taiwanese Will Fight If China Invades, Survey Finds 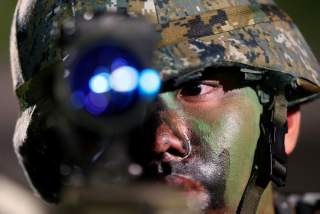 Perhaps Beijing’s breaches of Taiwan’s sea and air borders in intermittent circumnavigations since 2017 are to blame for widespread antagonism among Taiwanese, particular young people, observers with the pro-independence think-tank noted.

One of Beijing’s favorite platitudes on the issue of Taiwan is that “blood is thicker than water.” When reporting Taiwan affairs, mainland papers are mandated to report the “fact” that the island’s politics have been hijacked by a small bunch of obstinate separatists and that the mainstay of society is pro-unification.

But the situation on the ground appears to be quite the opposite, if a survey by a pro-independence think-tank is to be believed.

Nearly 70% of respondents made it clear in a recent survey conducted by the Taiwan Foundation for Democracy that they would either join the army or put up resistance in their own ways if mainland China were to attempt to annex Taiwan by force.

Perhaps Beijing’s breaches of Taiwan’s sea and air borders in intermittent circumnavigations since 2017 are to blame for widespread antagonism among Taiwanese, particular young people, observers with the pro-independence think-tank noted.

A number of People’s Liberation Army H-6K strategic bombers intruded into Taiwan’s air defense indemnification zone on Wednesday and Thursday, right after the Chinese military concluded a live-fire drill in waters west of the middle line of the Taiwan Strait.

The foundation said it was the right time to gauge people’s sentiment when Beijing contradicted its posture of goodwill with calls from the PLA about recapturing Taiwan via a decisive air raid and an amphibious offensive.

The survey was held from January 12 to 19, and 1,597 Taiwanese living in Taiwan proper and the outlying island of Penghu were interviewed, with a confidence level of 95% and a margin of error of 3 percentage points.

A total of 67.7% of respondents said they were willing to go to war to defend Taiwan if mainland China fired the opening salvo of a full-blown invasion.

The survey also found that the younger the respondent, the more averse the perception toward China.

On the other hand, the number of respondents willing to go to war for Taiwan independence stood at 55%, while an overwhelming 91% said they supported maintaining the “status quo,” that is, Taiwan not declaring its official independence while preserving its de facto   sovereign status.

A mere 1.5% said Taiwan should unify with the mainland immediately.

The commonly held opinion that most young Taiwanese are “congenitally in favor of independence” could be better put as they are “congenitally against unification with China,” a survey official told the island’s Central News Agency.

There is an obvious correlation between young advocates of democracy and open election and the young people willing to put up a fight to defend Taiwan.

“I think it is our democratic lifestyle and values that people want to protect,” said the foundation’s president, Hsu Szu-chien.