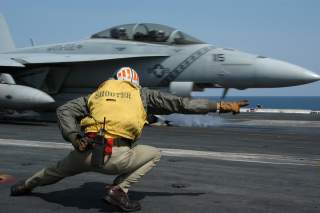 The Department of the Navy’s (DON) strike fighter squadrons are in a dire situation where—at least at last report during Congressional testimony on Feb.7, 2017—more than 62 percent of the service’s fighters are for all intents and purposes grounded. Of that total, the Marine Corps’ strike fighter fleet—which is composed mostly of older original model F/A-18A/B/C/D Hornets—is in even worse shape with as many as 74 percent of its jets not ready for war.

The DON is taking steps to resolve the problem, which is the cumulative result of years of overuse and funding disruptions that stem from the 2011 Budget Control Act. Additionally, in the case of the Marine Corps, the service made some very poor decisions on aircraft procurement—betting its future on the on-time arrival of the Lockheed Martin F-35B Joint Strike Fighter.

The solution to the problem is to increase the purchase of spare parts and push aircraft through depot maintenance faster. This new $238 million contract extension with Boeing to upgrade additional F/A-18s for the Navy and Marine Corps is part of that overall effort. The company’s Cecil Field facility will perform high flight-hour inspections, periodic maintenance inspections, in-service repair and modifications, upgrades and other engineering work for the aircraft.

“Our mission is to support the Navy’s effort to improve readiness,” Travis McBurnett, Boeing’s F/A-18 Sustainment program director, said in a statement. “Since 1999, the Boeing Cecil Field team has returned 880 modified or repaired F/A-18s to the Navy and Marines. We look forward to delivering many more in the coming years.”

However, even in the best-case scenario, it will take the DON—both the Navy and Marine Corps—years to recover from this debacle. That’s assuming stable funding without periodic disruptions as a result various continuing resolutions that are increasingly common as Congress routinely fails to pass budgets year after year. It’s not like this is a new problem—I’ve reported on this issue since before 2014 for The Daily Beast. If anything, matters have gotten worse year over year.

At the end of the day, repairing old aircraft is not a long-term solution. Aircraft have limited airframe life—which should be viewed as a consumable. A brand new F/A-18F coming off the production line in St. Louis, Missouri, has a fatigue life of 6000-hours. That airframe life can be extended, but it is not indefinite. At some point, a new aircraft will be needed. Thus, the Navy—or any other aircraft operator—has to continually buy new aircraft to maintain its force strength as airframe life is consumed.

The only real long-term solution to naval aviation readiness problems is to buy new aircraft. It doesn’t really matter if those jets are F/A-18s or F-35Cs—the service just needs more planes if it wants to have more flyable aircraft available.

The ideal solution would be to ramp up production of the Super Hornet and F-35C immediately and to accelerate the development of the Next Generation Air Dominance (F/A-XX) as soon as possible. It’s just a matter of increased and—more importantly—stable funding for the naval aviation. The question is if Congress has the political will to provide that money.