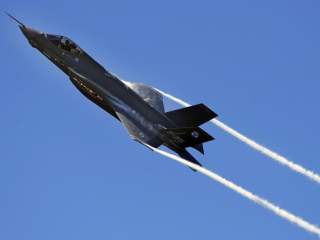 Following the submission that James Mugg and I made to the Senate Inquiry into planned acquisition of the F-35 Lightning II (Joint Strike Fighter), I was invited along to give evidence yesterday. It’s always good to see the Australian Parliament at work, and the Committee process is reassuring about the willingness of our politicians to engage with complex issues in a constructive manner. Here’s my opening statement to the Inquiry.

Thank you for the opportunity to appear this morning. As you probably know, the F-35, like the future submarine, has been a gift that keeps giving for someone in my line of work. The fact that we’re here today in 2016 to talk about it as a planned acquisition when the original conception was for a 2012 in-service date with the RAAF is a good illustration that things haven’t gone according to plan.

The question for the Committee is whether the deviation from plan is terminal, or whether it is a regrettable but ultimately manageable setback on the way to a mature capability. I think it is much more likely to be the latter than the former, despite much that the Committee has been told in written submissions and in evidence here. I won’t claim to have enough information at hand to make a solid judgment, though I would hazard that my professional qualifications and experience make me a reasonably experienced judge. My doctorate is in physics, I have been involved in defense capability development for over twenty years, and I managed a technical analysis branch in what was then DSD which had responsibility for electronic intelligence.

As well, I have had good access to the F-35 program during my time at ASPI. I have had briefings from our own Department of Defence, Lockheed Martin and discussions at the Pentagon on the subject. Most of the discussions were at the unclassified level, but I had the opportunity to discuss the modeling and simulation work that underpins the concept of operations for the F-35 with the practitioners. My conversations with those involved in modeling work suggested that I was dealing with careful analysts who well understood the nature of their business. They could explain their assumptions and, critically, how they tested the sensitivity of their conclusions to variations of those assumptions and of input parameters. The results of that work—which should be available to the Committee should you choose to ask for a brief—is starkly at odds with some of the material in submissions you have received.

Which brings us to the nub of the question that anyone wanting to understand the F-35 inevitable comes up against—who is right? On one hand you have a very active group of critics who have managed to get traction with the media and with elements of governments in Australia and Canada at least. As the submissions show, their view is that this program is a fiasco of extraordinary magnitude. On the other hand, you have the acquisition organizations and air forces of some of the most professional and competent operators of combat aircraft in the world—I include in that list Australia, Canada, Japan, Israel, Singapore, the United Kingdom and the United States. Those groups have access to classified data on the aircraft, and the partner nations also have good internal access to the program. Their collective judgment is that the F-35 is the way ahead for their air combat capability. (I think the Canadian Government will return to that conclusion unless money is their only driver.)

It is true that the American procurement system has the odd hiccup, and it has produced some systems that are far from meeting the cost-benefit balance required to justify their procurement. That generally happens when they shoot for ultra-high performance with insufficient regard for cost. Occasionally the American system produces systems that don’t work as advertised (the airborne laser comes to mind)—but only very occasionally. Much more often it is cost that leads to a ‘death spiral’ of ever-lower numbers and higher unit costs. In that list I’d include the Seawolf nuclear submarine, the B-2 bomber and—ironically, given that it is proposed by many as the solution for alleged intractable problems with the F-35, the F-22 Raptor fighter jet. All are fine platforms, and all are unaffordable. They are not good solutions to military problems.

In summary, to conclude that the F-35 is not the right solution for Australia’s air combat capabilities, we have to assume that the American procurement system has made a rare error on the biggest program it has ever done, and that the most professional militaries of the world have failed to notice when doing their due diligence.

That said, further slippage of the program seems possible—particularly where the software is concerned. In our submission we talked about a hedging strategy of additional Super Hornets in the event that a danger of a capability gap emerges in the next few years. That was certainly the right answer when the Howard Government purchased twenty-four Super Hornets back in 2007 as an “interim” capability. But that came with a cost of over $6 billion once maintenance for the rest of this decade is taken into account. So it’s not something you’d repeat lightly. We believe that remains the most viable fallback position, and I’m happy to expand on that in our discussion this morning.

Andrew Davies is the Director of the Defence and Strategy program at ASPI. This article first appeared on the Strategist.