Accept it. The U.S. and China Both Have Bases in One East African Country. 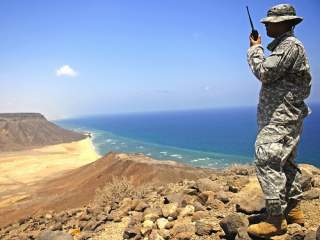 Recently, the Chinese government closed a deal with the Djibouti government to build its first international military base. The deal grants the Chinese government land rights for ten years, and has abruptly sparked debate over Chinese military interests in Africa. Commentators’ fears have focused on the threat of China’s military expansion in the region. The new base, however, reflects China’s long-term economic goals in Africa more than its current military objectives.

Not all stories about China’s investment in Africa have been positive, however. China has been accused of exploiting African countries for natural resources (including wildlife), importing its own labor, and keeping its African employees in poor working conditions. As the Chinese move away from commodities investments, they are still investing heavily in infrastructure projects. In recent years, China has invested in a number of major infrastructure projects across Africa, including a ten billion dollar port project in Tanzania, a multi-billion dollar bullet train in Nigeria, and a new parliament building in Zimbabwe. The new Tanzanian port, located in Bagamoyo, will be the largest in East Africa. Most recently, Chinese President Xi Jinping pledged sixty billion dollars in assistance and loans to Africa at the Forum on China-Africa Cooperation in South Africa. (We are yet to see if China will follow through on this promised assistance.)

It is no surprise that the Chinese would place a military post in Djibouti. They have been known to protect their African assets before. For example, China deployed a battalion of peace keepers to protect its oil assets in South Sudan at the end of 2014; in addition, like the U.S. military, they have run anti-piracy operations around the Gulf of Aden for years. The Chinese will be on the ground along with a number of French and Japanese troops who operate out of the Djibouti-Ambouli International Airport and some 4,000 U.S. military personnel located at Camp Lemonnier. (The United States is currently expanding Camp Lemonnier and in 2014 signed a twenty year deal to continue operating there.) The base will serve a number of different functions: as a logistics hub for naval operations to support Chinese anti-piracy operations, as a staging point for operations similar to the deployment in South Sudan, and a means for ensuring that Chinese infrastructure investments are safe.

The Chinese military serves the very real purpose of protecting and securing China’s trade and economic development, and as Chinese economic interests expand it is likely that their military presence will grow as well. The United States should remain cognizant of the potential for the base to serve a more combative role in the region. In the meantime, however, Washington should see the new base as an opportunity to begin working with the Chinese in Africa and build a platform for future U.S.-China cooperation.

Allen Grane is a research associate in Africa Policy Studies at the Council on Foreign Relations.