After Paris, Can Iran Be Counted on to Help Defeat ISIS? 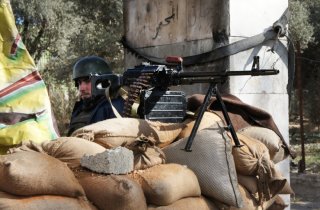 Iran may have joined in condemning the Islamic State’s (ISIS) vicious attack in Paris on November 13, but the terrorist strike also gives Tehran a major diplomatic opportunity to advance its goals in region. The United States, France, and other world powers are striving to build a more effective anti-ISIS campaign. Yet Iran’s own murky relationship with the extremist group may confound these efforts.

On one level, Iran views the Islamic State as a clear danger to its national security. Iran’s Ministry of Intelligence and Security chief Mahmoud Alavi warned the attacks in Paris represent a “serious warning” for Iran, and that ISIS remains the country’s most important threat in the field of hard (as opposed to soft or covert) war. Iran’s Army Chief Brigadier General Ahmed Reza Pourdestan threatened a “crushing response” should ISIS come within 25 miles of Iran’s borders, and arrests of several “ISIS teams” have occurred in Kermanshah over the past week.

“The nations of the region have confronted the brutal earthquake of ISIS in most of the Islamic and Arabic countries. Therefore, we understand and feel the painful sorrow of the French nation.” He stressed that perpetrators of the November 12 bombings in Beirut have been arrested and noted, “We will soon open other fronts against ISIS.”

Iran’s fear of ISIS, however, does not make it an ideal partner in combating the group. First, many within Iran’s leadership believe the Islamic State is ultimately a creation of the Gulf Arab states and the Western powers. Islamic Revolutionary Guard Corps’ (IRGC) Brigadier General Massoud Jazayeri condemned the Paris attacks, but also attributed them to the French government’s support of ISIS. He warned Western leaders not to misuse the tragedy to justify wars, “such as what happened after the September 11th attacks to the people of Afghanistan and Iraq.” Deputy Foreign Minister Hossein Amir Abdollahian reiterated Iran’s previous warnings to the Gulf States and the West that supporting the Islamic State could foment insecurity within their own countries. This misunderstanding hampers Iran’s strategic thinking, and leads to ineffective policies.

Second, Iran and the international community do not share the same primary objectives in Syria. The international community views the Islamic State as a more significant threat than Assad. For Iran, however, preventing Assad’s fall is paramount; battling ISIS remains a secondary priority. ISIS is not such an immediate threat that Iran is willing to work with opposition forces at the expense of its primary goal of keeping Assad in power.

Third, ISIS also serves a practical purpose for Iran. IS’s reign of terror and global ambitions have effectively distracted the international community from President Assad’s butchering of his own people. The United States and France are already pushing for greater cooperation with Russia in Syria, an implicit boon for Tehran’s new joint campaign with Moscow to preserve the current Syrian regime.

Finally, ISIS helps undermine the viability and credibility of any alternative to Assad’s rule. For Iran there is distinction with little difference between ISIS (accused of receiving support from Sunni Arab states and the West) and other Syrian opposition groups (known to receive support from the Sunni Arab states and the West). Tehran is happy to let the extremist organization fight it out with the various Sunni opposition groups that remain Assad’s most pressing political threat.

ISIS’s role in Iraq is more complicated. Deeply concerned by ISIS encroachment on Iran’s borders and the Shi’a heartlands of Iraq, Iran has focused on defending those areas. Tehran lacks the capability to roll-back ISIS in the Sunni-dominant areas of western and north-western Iraq, however. In absence of a long-term strategy to defeat the Islamic State, Iran must ironically rely upon its Arab opponents and Western states to bear the costs of combating the group.

Regardless of its sympathetic rhetoric, Tehran has no qualms about using ISIS to serve its immediate goals. It would be a mistake for US negotiators in Vienna--in the hopes of creating a broader anti-ISIS coalition--to accommodate Tehran’s demands that Assad could stay indefinitely. Such a course would fuel Iran’s longer-term ambitions of regional hegemony, and sacrifice the chance at a genuine political solution in Syria.