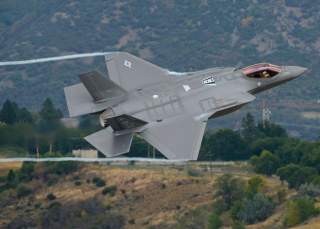 “I am proud to announce this powerful new weapons system has achieved initial combat capability (IOC),” Gen. Herbert “Hawk” Carlisle said in a statement. “The F-35A will be the most dominant aircraft in our inventory, because it can go where our legacy aircraft cannot and provide the capabilities our commanders need on the modern battlefield.”

With the jet being declared operational, the Air Force has enough pilots and maintainers trainers to deploy the F-35A with an operational squadron of between 12 and 24 aircraft. The service currently has a unit of 15 aircraft that are ready for combat operations at Hill Air Force Base, Utah. “The U.S. Air Force decision to make the 15 F-35As at Hill Air Force Base combat ready sends a simple and powerful message to America’s friends and foes alike – the F-35 can do its mission,” said Air Force Lt. Gen. Chris Bogdan, program executive officer for the F-35 Joint Program Office, in a statement. “The declaration of initial operational capability marks an important milestone as the Air Force will operate the largest F-35 fleet in the world with more than 1,700 aircraft.  The F-35 will form the backbone of air combat superiority for decades and enable warfighters to see adversaries first and take decisive action.”

But it must be noted that the F-35A’s capabilities are currently limited by the jet’s interim Block 3i software. Because the Block 3i capability is simply a new version of the earlier Block 2B software that was rehosted on newer computer hardware, the F-35A is currently only cleared to carry two AIM-120C AMRAAM air-to-air missiles and a pair of 1000lbs GBU-31 Joint Direct Attack munitions or pair of 500lbs GBU-12 laser-guided bombs just like the Marine Corps’ operational fleet of F-35B aircraft. Nor are all of the F-35’s datalinks and sensor capabilities fully implemented in the aircraft as it stands now. It also has a limited flight envelope—with a current max g-loading of 7.0 and a ceiling of 40,000ft.

Most of the capabilities that are expected for “full warfighter capability” will be resident in the forthcoming Block 3F configuration. The Block 3F configuration will enable the F-35A to fly to the edges of its flight envelop with a 9.0G-limit and a ceiling of 50,000ft. It will also allow for the jet to fully correlate all on and off-board data from multiple F-35s and other sources into a single coherent picture for its pilot. The Block 3F software will also enable the F-35 to carry a host of additional weapons and fire its gun. The Block 3F configuration is expected to be delivered in 2017 and would be fielded by 2019. “Today's declaration of IOC is an important milestone on the road to achieving full warfighting capability for the F-35A,” Air Force chief of staff Gen. David Goldfein said in a statement.

Meanwhile, the Pentagon is already looking at upgrading the F-35 with a follow-on Block 4 configuration—which would add new capabilities and address some known deficiencies. The Block 4 package would include a medley of new capabilities including upgraded electro-optical sensors, improved electronic warfare abilities and radar modifications. Block 4—which will be awarded in 2018 as a distinct new contract to Lockheed—will be run as a separate program from the main F-35 effort. Fielding of the Block 4 configuration is expected in 2022.

The only question that remains is: When will the F-35 deploy to combat for the first time?