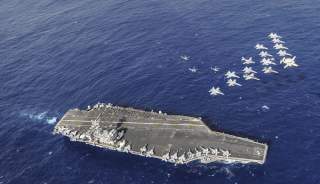 China has deployed its Liaoning aircraft carrier with escorting warships near Hainan Island as the US Navy’s Theodore Roosevelt strike group enters the South China Sea, according to a Hong Kong press report.

Sing Tao Daily said Thursday that the Nimitz-class carrier Roosevelt and the other warships of Carrier Strike Group 9 have ended a port visit to Singapore and are now sailing in the South China Sea.

The Chinese carrier group appears to be engaging in naval drills near Hainan. Hainan Province maritime officials have reportedly issued a temporary ban on travel in waters near the island, because of military maneuvers that are scheduled to take place from Thursday to Wednesday.

UPI, in picking up the story, noted the Roosevelt is sailing within the “nine-dash line” that extends more than 1,200 miles from the Chinese mainland into the South China Sea. Beijing claims the waters as its own, while the US and other nations say the area is in international waters.

The US Carl Vinson carrier strike group conducted joint exercises with Japanese naval units in the Western Pacific last month and is now headed back to its home port in San Diego.

Satellite photos show that China conducted a large-scale naval exercise near Hainan Island at the end of March. The ships included the Liaoning and 40 other warships.