All Is Not Well with Russia's Black Sea Fleet 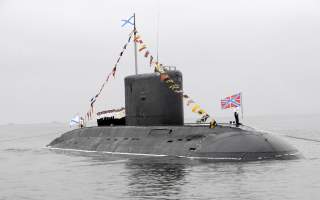 Russia’s submarine fleet is perhaps the most capable part of Moscow’s naval forces, but not all is well with the undersea component of the Kremlin’s Black Sea fleet.

Due to the stipulations of the 1936 Montreux Convention that gives control of the Bosporus Straits and the Dardanelles to Turkey, Russia is restricted in how it is allowed to move its naval forces—particularly aircraft carriers and submarines—through those waterways. However, Moscow’s loss is Washington and NATO’s gain—but if the Kremlin manages to sway Turkey into its orbit, the tables would turn in Russia’s favor.

The Russians have assigned six newly built Project 636.3 Varshavyanka class diesel-electric submarines—which are referred as Improved Kilos by NATO—to the Black Sea Fleet. Four of those vessels, Novorossiysk, Rostov-na-Donu, Staryy Oskol and Krasnodar arrived at Sevastopol between 2015 and 2017. Two additional boats, Velikiy Novgorod and Kolpino, arrived in the Eastern Mediterranean in September 2017, but have never sailed through the Bosporus to formally join the Russian Black Sea Fleet’s 4th Separate Submarine Brigade.

Instead, as Alexander Shishkin notes in the Russian language Vzglyad Online, Velikiy Novgorod and Kolpino are de facto based at Moscow’s Tartus naval base in Syria. The reason for that is there are severe operational restrictions imposed on Russia’s Black Sea Fleet submarines as a result of the Montreux Convention.

Article 12 of the Montreux Convention states:

“Black Sea Powers shall have the right to send through the Straits, for the purpose of rejoining their base, submarines constructed or purchased outside the Black Sea, provided that adequate notice of the laying down or purchase of such submarines shall have been given to Turkey. Submarines belonging to the said Powers shall also be entitled to pass through the Straits to be repaired in dockyards outside the Black Sea on condition that detailed information on the matter is given to Turkey. In either case, the said submarines must travel by day and on the surface, and must pass though the Straits singly.”

As Shishkin notes, both Velikiy Novgorod and Kolpino are legally entitled to enter the Black Sea for repairs. However Turkey—under Article 12 of the Montreux Convention—does not have to permit those submarines to transit back into the Mediterranean. The Russians interpret the Montreux Convention language to mean that submarines can only transit the straits for repairs. The language in the document is not entirely clear on that point but the Soviet Union never attempted to send submarines though those waterways before its 1991 demise. “The submarines can go outside the Black Sea, but also only for repairs and not just at any point in time,” Shishkin wrote. “Russian submarines are restricted from traveling abroad until a real need for the next drydock repairs arises in 2.5 years.”

In Shishkin’s view, there are three options for Russia to use Velikiy Novgorod and Kolpino operationally in the Mediterranean. One is for the two submarines to return to Admiralteyskiye Verfi in Saint Petersburg for repairs. Another is to send a floating drydock to Tartus while the third option is to perform maintenance work in Egypt or Cyprus. Shishkin’s preferred option is to repair the submarines in either Egypt or Cyprus.

But repairing the submarines in the Mediterranean is only a Band-Aid solution. Shishkin argues that for a sustained and operationally viable diesel-electric submarine presence in the Eastern Mediterranean, Russia will need to build more Project 636.3 or Project 677 Lada boats to plug the operational gap. Further, Moscow will have to upgrade the Tartus facility to handle maintenance of those vessels.

“A minimum program is two submarines for Tartus and a maximum program is four for Tartus and two for the Black Sea,” Shishkin wrote. “A brigade of its own submarines (and not detached-duty ones) will not come at a better time for the Russian Navy Mediterranean formation, doomed to become a squadron again sooner or later. Suffice it to say that four Project 636.3 submarines, in addition to fulfilling traditional antiship and anti-submarine missions (72 torpedoes), can lay up to 96 sea mines or launch up to 48 3M14 cruise missiles of the Kalibr complex against shore targets.”

Such a Russian force in the Eastern Mediterranean would certainly pose a threat to not only NATO naval forces, but also a range of targets across Europe. Kalibr-equipped Improved Kilo-class submarines operating in the Mediterranean would afford Russia the capability to hit strategic targets anywhere inside Europe with pinpoint accuracy. If those submarine-launched Kalibr missiles were to be armed with nuclear warheads, Russia could potentially hold the entire continent under nuclear threat just as the Soviet Union once did with its RSD-10 Pioneer (SS-20 Saber) intermediate-range ballistic missile that was banned under the 1987 Intermediate-Range Nuclear Forces Treaty.

However, Russia might not need to bother building additional diesel-electric submarines for its Black Sea Fleet. If Turkish president Recep Tayyip Erdoğan continues to drift away from the West towards Moscow’s orbit, it is not outside of the realm of the possible that a future Kremlin-oriented Ankara might renegotiate or reinterpret the Montreux Convention. Turkey previous allowed the Soviet Union to transit its Kiev-class and Kuznetsov-class aircraft carriers—which are also forbidden to pass though the Bosporus—through the straits under the fiction that those vessels were "aircraft carrying cruisers."