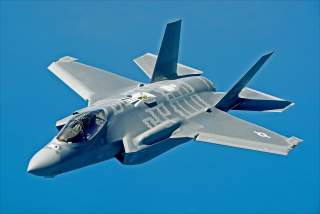 When president-elect Donald Trump was still a candidate, he criticized the F-35 Joint Strike Fighter — rare for a presidential candidate — during an appearance on the Hugh Hewitt Show.

“I do hear that it’s not very good. I’m hearing that our existing planes are better … [Test pilots] are saying it doesn’t perform as well as our existing equipment, which is much less expensive,” Trump said during the Oct. 22, 2015 radio interview.

“So when I hear that, immediately I say we have to do something, because you know, they’re spending billions.”

“This is a plane, there’s never been anything like it in terms of cost,” he added. “And how about, you know, we’re retooling with planes that aren’t as good as the ones we have, and the test pilots are amazing people. They know better than anybody, okay, and I think you would accept that.”

But now that Trump will assume the presidency, it’s unlikely he will slow the F-35 program down, and could accelerate it with an expected rise in the Pentagon’s budget — and to fulfill his own plan to grow the U.S. Air Force’s fighter strength.

In any case, the F-35 program long ago become unstoppable in Washington.

The Pentagon plans to buy 2,400 of the radar-evading stealth fighters in the coming decades in three versions for the Air Force, Navy and Marines. It is history’s most expensive weapons program.

There is an unkillable amount of inertia behind the F-35. Ditching it, at this point, would mean eliminating thousands of jobs — and wiping out hundreds of billions of dollars — over decades of work to get the program where it is today.

There’s more. The Air Force needs to buy the stealthy jets as its current fighters atrophy, and manufacturer Lockheed Martin has dedicated a nation-sized marketing and lobbying budget to keep the program going.

Right now, this lobbying effort is aimed squarely at the Trump transition team.

“With the election now complete, we are working with president-elect Trump’s transition team,” Orlando Carvalho, Lockheed’s executive vice president for aeronautics — told the Fort Worth Star-Telegram. “We believe that in working with his transition team all the right information will get communicated and they’ll make the right decisions.”

Revealingly, Lockheed’s stock jumped six percent after Trump’s victory. But the fact is — Joint Strike Fighters would have kept rolling off the assembly line in Fort Worth no matter who won the election.

Read between the lines a little further, and it’s easy to see why Lockheed is acting confident. In September, Trump said he plans to boost the Air Force’s fighter strength to 1,200 airplanes — or more precisely, 1,200 combat coded aircraft that have the full suites of avionics, weapon systems and other gear which makes them battle-worthy.

The flying branch currently has fewer than 1,200 combat-coded fighters, according to the Heritage Foundation, but around 1,750 fighters in total.

But to bring the combat number up to 1,200 — while growing the Army and Navy at the same time — would require increasing the defense budget and boosting production of Air Force variant F-35As. That’s at least as long as Congress and the Air Force continue to insist on outfitting the future fleet with them; and they will.

See, the problem is that the Joint Strike Fighter is not only expensive, but more expensive than originally planned. There are a lot of complicated reasons for this, but the primary cause is the plane’s complex and troubled everything-in-one design. It’s a stealthy fighter, ground-attack plane and — with the F-35B version — can take off and land vertically.

But as costs inevitably rose, the Pentagon slowed down the rate in which it bought the planes from Lockheed. Thus, as the Air Force’s existing, decades-old F-15s and F-16s continued aging, the total number of fighters in the inventory began to shrink.

So to make up the shortfall, a Trump administration won’t have many options. It could order the Air Force to keep its F-16s and F-15s around longer as the F-35s enter service, but that will invariably lead to higher maintenance costs on creaky airframes, which could be spent on building more Joint Strike Fighters.

“Remember, we’re the ones with the jet fighters that are 20 years old that we have to go to graveyards, plane graveyards, to get parts to use on our jet fighters,” Trump said during a June 16 speech in Dallas.

“To have our great young people to fly in planes where they go into junk yards and museums to get parts for current fighters, while our opponents and our so-called allies are buying our planes, and they’ve got the new beautiful versions of them, and we’ve got old planes, I mean literally obsolete planes.”

Taking Trump at his word, we can expect him to do something — and that is to work with the Air Force on buying more “not very good” F-35s.