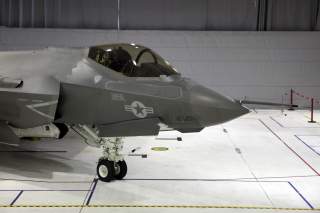 The Pentagon’s F-35 Joint Strike Fighter fleet has accumulated over 100,000 flight hours as development of the stealthy new fighter approaches the finish line.

Contractor Lockheed Martin expects that it will complete development work on the full Block 3F configuration by the end of the year. Delivering the full Block 3F would complete the requirements set forth under the System Development and Demonstration (SDD) contract that was originally awarded to Lockheed in 2001.

“This 100K milestone marks a significant level of maturity for the program and the F-35 weapons system,” Lockheed Martin executive vice president and F-35 program general manager Jeff Babione said in a statement.

“We are well positioned to complete air vehicle full 3F and mission systems software development by the end of 2017.”

lockheed, the company and the F-35 integrated test force still have to validate the final release version of the Block 3F software—which is arguably the most important remaining task.

Testers will have to do additional testing on the short takeoff/vertical landing (STOVL) F-35B for operations at austere sites and ski-jump operations. The latter is a requirement for operations onboard Britain’s Queen Elizabeth-class carriers, which are not equipped with catapults and arresting gear.

- Performed multi-ship mission effectiveness tests, such as Offensive Counter-Air and Maritime Interdiction, demonstrating the performance of the F-35 System.