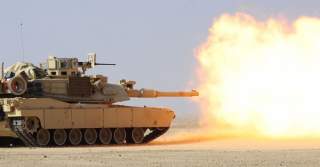 The Army is fast-tracking an emerging technology which gives combat vehicles an opportunity identify, track and destroy approaching enemy rocket-propelled grenades in a matter of milliseconds, service officials said.

Called Active Protection Systems, or APS, the technology uses sensors and radar, computer processing, fire control technology and interceptors to find, target and knock down or intercept incoming enemy fire such as RPGs and Anti-Tank Guided Missiles, or ATGMs.

“Trophy will not only knock an RPG out of the sky but it will also calculate the shooter’s location. It will enable what we call slew-to-cue. At the same time that the system is defeating the threat that is coming at it, it will enable the main gun or sensor or weapons station to vector with sights to where the threat came from and engage, identify or call in fire. At very least you will get an early warning to enable you to take some kind of action,” he explained. “I am no longer on the defensive with Trophy. Israeli commanders will tell you ‘I am taking the fight to the enemy.’