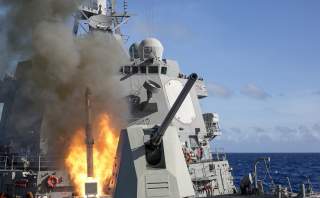 Editor’s Note: The following is an excerpt from the recent China Policy Institute Report - America’s Air-Sea Battle Concept: An Attempt to Weaken China’s A2/AD Strategy. You can read the full report here.

Over the last several years, American military planners have begun the complex task of reorienting U.S. military capabilities towards presumed challenges of the future. While such planning may be slowed thanks to U.S. and allied operations against the “Islamic State”, strategists from both political parties recognize long-term trends in military technology along with the diffusion of advanced, precision strike weapons guarantee that fundamental changes in U.S. military planning, procurement, and overall grand strategy are needed to preserve existing military dominance.

What We Need To Know:

Beginning in roughly 2007 under the George W. Bush administration with a new U.S. Navy maritime strategy, a shift away from counterinsurgency operations began. Indeed, U.S. defensive planners since the early 2000’s have become increasingly concerned over the emergence of what China calls “counter-intervention operations” or what many in the West refer to as Anti-Access-Area Denial (A2/AD) military challenges. Such a strategy, broadly stated, attempts to slow, limit, deny or deter a superior technologically advanced foe from conducting threatening military operations. Using a combination of various military platforms such as ultra-quiet diesel submarines, over 80,000 sea mines, various types of cyber warfare, anti-satellite weapons and swarm attacks by ballistic and cruise missiles Chinese military planners are constructing what various scholars have referred to as an “assassin’s mace” of A2/AD capabilities. Chinese strategists in most scenarios assume United States military forces and their allies would be the intended target in scenarios ranging from military action over the East and South China Seas, operations concerning Taiwan, and increasingly over any and all areas in and around the first island chain.

Just as past experiences—events like the 1995-1996 Taiwan Crisis and the 2001 Hainan Island Crisis—have pushed China towards an A2/AD-based strategy, America’s own history will guide its response to future challenges with A2/AD being a major part of Washington’s post “war on terror” strategic outlook. American military planners have long considered A2/AD challenges an area of priority stretching back at least as far a  1992, when the first reference of the term “anti-access” was used in a largely forgotten RAND study. Since then, specifically since 2007 onward, U.S. strategic thinkers have considered a number of options that could negate the impact of A2/AD tactics and weapons platforms, with heavy focus squarely aimed at specific Chinese A2/AD military capabilities.