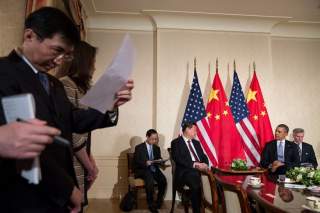 Over $5 Trillion dollars of goods move across the hotly disputed waters of the South China Sea on an annual basis—and China seems focused on turning the area into its special sphere of influence.

Tensions have been steadily rising over the last few years in what Robert D. Kaplan has dubbed Asia’s Cauldron, and so far Washington has been unable to find the magic formula to get Beijing to back off. A new U.S. plan reported by the Financial Times will do little to change Beijing’s calculus. In fact, it could make matters far worse.

This supposed new strategy will focus heavily on surveillance flights and what might be dubbed a simple “shaming” strategy. FT reports that Washington will step up its use of surveillance assets in the area which “could be coupled with a greater willingness to publicize images of videos of Chinese maritime activity.”  It goes on to note, “some US officials believe the Chinese might be given pause for thought if images of their vessels harassing Vietnamese or Filipino fisherman were to be broadcast.”

This is not all:

“The US military’s Hawaii-based Pacific command has also been asked to co-ordinate the development of a regional system of maritime information, which would allow governments in the western Pacific detailed information about the location of vessels in the region. Several governments say they have been caught unawares by the surprise appearance of Chinese ships.

The US has supplied the Philippines, Japan and other countries in the region with improved radar equipment and other monitoring systems and is now looking for ways to build this information into a broader regional network that shares the data.

The Pentagon has also been working on plans for calculated shows of force, such as the flight of B-52s over the East China Sea last year after China declared an exclusive air defense zone over the area. The potential options involve sending naval vessels close to disputed areas.”

While such a plan clearly shows Washington is doing what it can to demonstrate support for allies and partners in the region in an attempt to deter Beijing, there are many pitfalls that should be considered—especially when it comes to the wider use of surveillance assets. For one, the U.S. would obviously have to place men and women in harm’s way in contested waters time and time again in order to enact this part of the plan. You don’t have to be a bookie in Vegas to understand the odds of some sort of tragic incident occurring are quite high. In this case, the goal of “doing something” might actually be worse than doing nothing. As history tells us quite clearly, wars can start from a small incident where tensions are running high. The consequences can be dire.

The ultimate challenge for American leaders is that they have devised a plan of action to only deal with scenarios where U.S. and Chinese forces would come into direct, kinetic conflict—the hotly debated Air-Sea Battle operational concept, something I strongly support. However, as Zachary Keck noted in these pages several months back “the problem with ASB (and its main competitors) is that they are only designed for high-level conflict, and thus can only be implemented if the U.S. and China move from a state of tense peace to a state of total war.”  Keck continues, explaining that “unless China takes a brazenly provocative action such as invading Taiwan or parts of Japan, ASB is more or less useless. No U.S. president is going to order the U.S. military to take the extremely provocative actions that ASB would require because of, say, recent actions by China setting up an oil rig in waters that it disputes with Vietnam.”

So far, Washington has been unable to deter Beijing from using a whole host of non-kinetic actions—sometimes referred to as “small-stick diplomacy”—to fundamentally alter the status quo in the South China Sea and make provocative moves to the north in the East China Sea. What to do in an area of the globe where multiple nations have various disputes with China and each other over the waves that control vital sea lanes, small islands and reefs, as well as possible riches in the form of natural resources. The Obama administration has been more focused on the bigger picture, that if the winds of war ever came to the region, Washington would have a plan of action for negating Beijing’s growing anti-access/area-denial arsenal. American can pivot, rebalance or pronounce its intentions to make the Asia-Pacific and wider Indo-Pacific its main focus all it wants, however, if it can’t prevent China from altering the status-quo, its bumper sticker foreign policy pronouncements are painfully meaningless.

If you want to use the shame game to alter Beijing’s strategic calculus, there might be a better way.  There only seems one solution to the various territorial disputes in the region—specifically, what some are calling “lawfare.” All of the various claimants that have disputes with China in the South China Sea should appeal collectively to any and all international bodies that could possibly hear their claims. Only together can they hope to get Beijing to halt its aggressive actions. This may just have the same or greater impact than if the U.S. attempted to use surveillance flights to embarrass Beijing—without the possibility of an incident spiraling into a possible conflict no one wants. While Manila has already filed its own claims against Beijing and Hanoi seems likely to follow suit, a joint claim or multi-party suit would be much more powerful. China should realize its neighbors have the ability to resist its claims without resorting to kinetic means.

While even this might not stop China’s moves to enforces its claims in the area around its nine or ten-dash line around the South China Sea, if shaming Beijing is the goal, and considering the stakes (not just who controls sea lanes worth trillions of dollars, but the very idea of the global commons, space that no one owns), this might be just the best way to do it.