Is America About to Dump the INF Treaty? 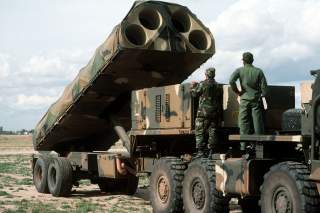 A group of arms control experts is urging Senators to vote for an amendment to the fiscal year 2018 National Defense Authorization Act that would prohibit the Pentagon from developing a new ground launched cruise missile in contravention of the landmark Intermediate-Range Nuclear Forces (INF) treaty of 1987.

“We write to urge you to co-sponsor and support amendment number 984 filed by Senators Elizabeth Warren (D-MA) and Mike Lee (R-UT) to revise section 1635 of the fiscal year 2018 National Defense Authorization Act to prohibit the use of funds to begin development of a new, ground-launched cruise missile (GLCM) until the Secretary of Defense submits a report on the rationale for and implications of such a weapon,” reads the letter, which was signed by more than a dozen arms control advocates and former U.S. government officials on Sept. 13.

The arms control advocates argue that developing an American GLCM would destroy the INF, which many scholars such as former U.S. Ambassador to the Soviet Union under President Ronald Reagan argue marked the true end of the Cold War.

“The fiscal 2018 National Defense Authorization bill before the Senate proposes to authorize $65 million for the Pentagon to begin development of a new GLCM with a range up to 5,500 km that is prohibited by the 1987 Intermediate-Range Nuclear Forces Treaty (INF), which is under strain due to Russia’s testing and deployment of a noncompliant ground-based cruise missile system,” the letter states.

“Rather than helping to repair and preserve the INF Treaty as proponents claim, the pursuit of a new, INF-noncompliant nuclear weapons delivery system would accelerate its demise.”

Abrogating the INF treaty would be a victory for Russia, which could claim that it was Washington rather than Moscow that is undermining the arms control regime. Developing a new GLCM is unnecessary because both the United States and Russia have air and sea launched nuclear weapons that can operate at similar ranges as intermediate range ground-based weapon.

“Such a move is militarily unnecessary, would provide a propaganda bonanza for Russian President Vladimir Putin, increase the risks of destabilizing nuclear competition, and further alienate allies in Europe already unsettled by President Trump’s uncertain commitment to their security,” the letter states.

“Although proponents argue that the INF Treaty does not prohibit research or development, going down this road sets the stage for Washington to violate the agreement and would take the focus off Russia’s own INF violation. Russia could respond by publicly repudiating the treaty and deploying large numbers of noncompliant missiles without any constraints.”

Instead, the arms control experts suggest that the United States must work to reinforce the INF treaty.

“The United States should seek to preserve and strengthen the existing bilateral arms control architecture, including the INF Treaty and the 2010 New Strategic Arms Reduction Treaty,” the letter states.

“These agreements constrain Russia’s nuclear forces and provide stability, predictability and transparency. Their value has only increased as the overall U.S.-Russia relationship has deteriorated. Russia’s violation of the INF Treaty is a serious matter. But a tit-for- tat response—developing our own new nuclear-armed missile—won’t make us safer and will only make the problem worse.”